Sirene (Albanian: djathë i bardhë; Bulgarian: сирене Macedonian: сирење; Serbian: сир/sir) also known as "white brine sirene" (Bulgarian: бяло саламурено сирене) is a type of brined cheese made in the Balkans (South-Eastern Europe), especially popular in Bulgaria, Serbia, Montenegro, Bosnia and Herzegovina, North Macedonia, Romania, Albania and also in Israel and Lebanon. It is made of the milk of goats, sheep, or cows, or a mixture of these. It is slightly crumbly, with at least 46–48% of dry matter containing 44–48% of fat. It is commonly produced in blocks, and has a slightly grainy texture. It is used as a table cheese, in salads, and in baking.

Sirene, together with yogurt, is a national food of all the countries in the Balkans, with many national and regional variations. 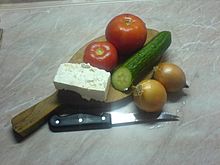 Products for preparation of Bulgarian Shopska salad (including Sirene).

Eggs: Fried eggs and omelettes with sirene. There is also a popular kind of boiled eggs over mashed sirene with a sauce of yogurt, garlic, parsley and walnuts (яйца по панагюрски; eggs à la Panagyurishte).

Pasta and cornmeal: For breakfast, macaroni or flat noodles (Bulgarian: "юфка, yufka") with sirene and sugar are popular. Kachamak (the local variant of cornmeal, polenta or the Romanian mămăligă) is always eaten with sirene.

Pastry: The traditional banitsa and other kinds of pastry are also made with sirene.

Stuffed peppers are more often stuffed with rice, but are also made with sirene-and-eggs filling.

Also it is consumed as an appetizer.

Similar cheeses in other countries

Many Balkan and other cheeses are similar to (but not the same as) sirene, and are known by various names. The local consumers of each country are usually well-aware of the differences between the various white cheeses. Part of the differences are that the breeds of sheep and goats in each region are different, and their feed may have specific regional characteristics that affect the taste and texture of cheese made from their milk.

All content from Kiddle encyclopedia articles (including the article images and facts) can be freely used under Attribution-ShareAlike license, unless stated otherwise. Cite this article:
Sirene Facts for Kids. Kiddle Encyclopedia.