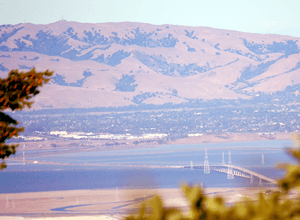 The Dumbarton Bridge as seen from Skeggs Point. 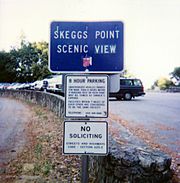 Skeggs Point is a scenic turnout in San Mateo County along State Route 35 between Kings Mountain and State Route 84. The feature is marked with a guide sign along the road and is listed on the USGS 7.5 minute quadrangle, "Woodside, California" as well as in the National Geographic Names Database. The area is about three miles (five kilometers) west and 2,000 feet (600 m) above the town of Woodside.

A peak named Sierra Morena (elevation 2,417 ft or 737 m) is a prominent local feature about 100 feet (30 m) west of the Skeggs Point turn-out. One of the highest points in San Mateo County (according to U.S. Geological Survey maps), Sierra Morena is closed to the public because of communication antennas and microwave equipment. Land along the roadway is largely owned by a Special District, the Midpeninsula Regional Open Space District. 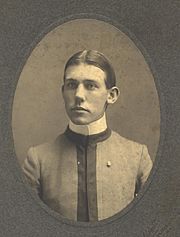 The geographic feature was named for Colonel John Hunt Skeggs, (US Army ret.), who served in World War I. On returning from the war, he worked as California Department of Transportation (Caltrans) District 4 engineer from roughly 1919 until his retirement in 1952. Skeggs was a high-profile factor in early Caltrans District 4 project work building US 101, SR 35, SR 152 through Pacheco Pass, the Waldo Tunnel, the Altamont Pass (then US 50 and now part of I-580), as well as a pre-1952 El Camino Real widening project. Before the war, he worked for the City of Los Angeles Department of Water and Power, (DWP).

In Neil Young's autobiography, Waging Heavy Peace: A Hippie Dream, he describes writing "Like a Hurricane" at Skeggs Point Scenic Lookout in the back of a 1950 DeSoto Suburban.

All content from Kiddle encyclopedia articles (including the article images and facts) can be freely used under Attribution-ShareAlike license, unless stated otherwise. Cite this article:
Skeggs Point (California) Facts for Kids. Kiddle Encyclopedia.