Altamont Pass, formerly Livermore Pass, is a low mountain pass in the Diablo Range of Northern California between Livermore in the Livermore Valley and Tracy in the San Joaquin Valley. The name is actually applied to two distinct but nearby crossings of the range. The lower of the two, at an elevation of 741 ft (226 m), carries two railroad rights-of-way (ROWs) and Altamont Pass Road, part of the old Lincoln Highway and the original alignment of US 50 before it was bypassed c. 1937. The bypass route travels over the higher summit, at 1,009 ft (308 m), and now carries Interstate 580, a major regional highway heavily congested by Central Valley suburbanization.

Of the two railroad lines through the old pass, one is still in use: the ex-Western Pacific line, sometimes known as the Altamont Corridor, now owned by Union Pacific. It carries freight trains as well as the Altamont Corridor Express, which gives its occasional name (A.C.E.) and operates between Stockton, Livermore, Pleasanton, Fremont, and San Jose. The abandoned right-of-way was used by the Southern Pacific, now also part of Union Pacific. This line was the Bay Area's original connection to the transcontinental railroad, from 1869 until 1879, when a sea level ferry crossing at the Carquinez Strait replaced it. The route remained in use for other purposes, but it was abandoned in 1984 in favor of trackage rights on the ex-Western Pacific line.

From 1966 to 2008, the Altamont Pass area was home to the Altamont Speedway, which became famous as the site of the 1969 Altamont Free Concert, a large outdoor concert featuring The Rolling Stones and marred by violence. The pass is also known for the Altamont Pass Wind Farm, one of the earliest in the United States.

From the time of the California Gold Rush, what is now Altamont Pass was called Livermore's Pass after Robert Livermore, the owner of the Rancho Las Positas and a way station near the pass. After the railroad was built through the pass in 1869, Altamont, formerly The Summit, was established in 1872. Eventually the pass took the name of the town, but the site is now essentially uninhabited. 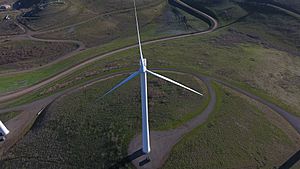 All content from Kiddle encyclopedia articles (including the article images and facts) can be freely used under Attribution-ShareAlike license, unless stated otherwise. Cite this article:
Altamont Pass Facts for Kids. Kiddle Encyclopedia.