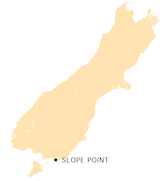 Slope Point is the southernmost point of the South Island of New Zealand.

Slope Point lies just south of the small settlements of Waikawa and Haldane, near the southwestern edge of the Catlins and Toetoes Bay and 71 km (40 mi) east of Invercargill.

The land around Slope Point is used for sheep farming with no houses anywhere nearby. Eroded cliffs drop down to the sea below. An AA signpost there shows the distance to the Equator and the South Pole, and a small solar-powered lighthouse stands on farmland.

There is no road to Slope Point; it can be reached by a 20-minute walk following dilapidated yellow markers. Its latitude, longitude is approximately 46.67 S, 169.00 E. There is no public access during the lambing season (September – November).

All content from Kiddle encyclopedia articles (including the article images and facts) can be freely used under Attribution-ShareAlike license, unless stated otherwise. Cite this article:
Slope Point Facts for Kids. Kiddle Encyclopedia.