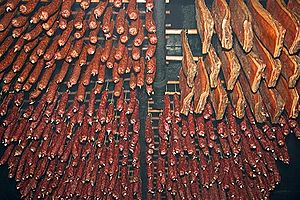 Meat hanging inside a smokehouse in Switzerland 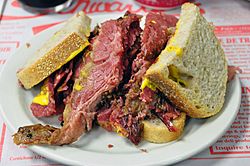 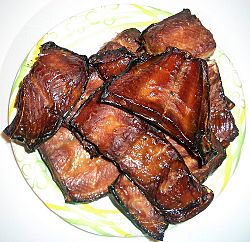 Smoking is the process of flavoring, browning, cooking, or preserving food by exposing it to smoke from burning or smoldering material, most often wood. Meat, fish, and lapsang souchong tea are often smoked.

In Europe, alder is the traditional smoking wood, but oak is more often used now, and beech to a lesser extent. In North America, hickory, mesquite, oak, pecan, alder, maple, and fruit-tree woods, such as apple, cherry, and plum, are commonly used for smoking. Other biomass besides wood can also be employed, sometimes with the addition of flavoring ingredients. Chinese tea-smoking uses a mixture of uncooked rice, sugar, and tea, heated at the base of a wok.

Some North American ham and bacon makers smoke their products over burning corncobs. Peat is burned to dry and smoke the barley malt used to make whisky and some beers. In New Zealand, sawdust from the native manuka (tea tree) is commonly used for hot smoking fish. In Iceland, dried sheep dung is used to cold-smoke fish, lamb, mutton and whale.

Historically, farms in the Western world included a small building termed the "smokehouse", where meats could be smoked and stored. This was generally well-separated from other buildings both because of the fire danger and because of the smoke emanations; the smoking of food could possibly introduce polycyclic aromatic hydrocarbons which may lead to an increased risk of some types of cancer; however, this association is still being debated.

Smoking can be done in four ways: cold smoking, warm smoking, hot smoking, and through the employment of "liquid smoke". However, these methods of imparting smoke only affect the food surface, and are unable to preserve food, thus, smoking is paired with other microbial hurdles, such as chilling and packaging, to extend food shelf-life.

All content from Kiddle encyclopedia articles (including the article images and facts) can be freely used under Attribution-ShareAlike license, unless stated otherwise. Cite this article:
Smoking (cooking) Facts for Kids. Kiddle Encyclopedia.