Montreal-style smoked meat, Montreal smoked meat or simply smoked meat in Quebec (French: smoked-meat; sometimes viande fumée) is a type of kosher-style deli meat product made by salting and curing beef brisket with spices. The brisket is allowed to absorb the flavours over a week, is then hot smoked to cook through, and finally is steamed to completion. This is a variation on corned beef and is similar to pastrami.

The origins of Montreal smoked meat are uncertain and likely unresolvable. Many have laid claims to the creation or introduction of smoked meat into Montreal. Regardless, all of these stories indicate the creators are of the Jewish Diaspora from Romania or Eastern Europe: 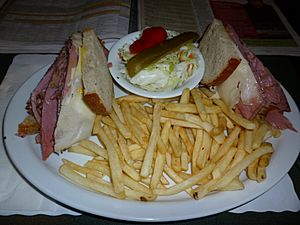 An atypical smoked meat sandwich topped with swiss cheese, served with coleslaw, french fries and one quarter of a pickle. Generally, the authentic version of the sandwich would not include cheese given kosher dietary restrictions on mixing meat with dairy.

Warm Montreal smoked meat is always sliced by hand to maintain its form, since doing so with a meat slicer would cause the tender meat to disintegrate. Whole briskets are kept steaming and sliced up on demand when ordered in the restaurant to maintain its temperature.

Even when hand-cut, Montreal smoked meat produces a lot of broken bits when sliced. These pieces are gathered together and commonly served with French fries, cheese curds, and gravy as smoked meat poutine or served over spaghetti with bolognese sauce or even pizza.

Montreal-style smoked meat sandwiches are typically built with seedless, light rye bread, and piled with hand-sliced smoked meat about 5 cm (2 in) high with yellow prepared mustard. The customer can specify the amount of fat in the smoked meat:

Montreal smoked meat is offered in many diners and fast food restaurant chains in Montreal, the rest of Quebec, and the rest of Canada. Along with bagels, smoked meat has been popular in Montreal since the 19th century and is identified as emblematic of the city's cuisine. Despite the food's origins in, and association with, Montreal's Jewish community and, contrary to what is sometimes asserted, delis are seldom certified as kosher.

Montreal smoked meat has also been integrated into Quebec dishes such as poutine.

Internationally, on Saint-Jean-Baptiste Day, smoked meat sandwiches are eaten, along with steamed hot dogs (referred to by the locals as "steamies"), classic poutine, Quebec microbrewery beer, and artisanal Quebec chocolate.

All content from Kiddle encyclopedia articles (including the article images and facts) can be freely used under Attribution-ShareAlike license, unless stated otherwise. Cite this article:
Montreal-style smoked meat Facts for Kids. Kiddle Encyclopedia.