Snow-White and Rose-Red facts for kids

"Snow-White and Rose-Red" (German: Schneeweißchen und Rosenrot) is a German fairy tale. The best-known version is the one collected by the Brothers Grimm (KHM 161). An older, somewhat shorter version, "The Ungrateful Dwarf", was written by Caroline Stahl (1776–1837). Indeed, that appears to be the oldest variant; no previous oral version is known, although several have been collected since its publication in 1818. Oral versions are very limited regionally. The tale is of Aarne-Thompson type 426 ("The Two Girls, the Bear, and the Dwarf").

This story is not related to the Brothers Grimm fairy tale "Snow White" that provided the basis for the 1937 Walt Disney animated film Snow White and the Seven Dwarfs. The modern German name of that heroine is Schneewittchen rather than Schneeweißchen. This story has little in common but the similar name of its fair-haired girl. "Snow-White and Rose-Red" does feature encounters with one dwarf.

Snow-White and Rose-Red are two little girls living with their mother, a poor widow, in a small cottage by the woods. Fair-haired Snow-White is quiet and shy and prefers to spend her time indoors, doing housework and reading. Dark-haired Rose-Red is outspoken, lively and cheerful, and prefers to be outside. They are both very good girls who love each other and their mother dearly, and their mother is very fond of them as well.

One winter night, there is a knock at the door. Rose-Red opens the door to find a bear. At first, she is terrified, but the bear tells her not to be afraid. "I'm half frozen and I merely want to warm up a little at your place," he says. They let the bear in, and he lies down in front of the fire. Snow-White and Rose-Red beat the snow off the bear, and they quickly become quite friendly with him. They play with the bear and roll him around playfully. They let the bear spend the night in front of the fire. In the morning, he leaves trotting out into the woods. The bear comes back every night for the rest of that winter and the family grows used to him. 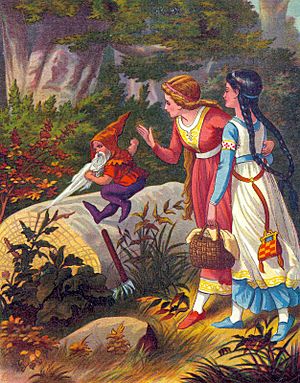 When summer comes, the bear tells them that he must go away for a while to guard his treasure from a wicked dwarf. During the summer, when the girls are walking through the forest, they find a dwarf whose beard is stuck in a tree. The girls rescue him by cutting his beard free, but the dwarf is ungrateful and yells at them for cutting his beautiful beard. The girls encounter the dwarf several times that summer, rescue him from some peril each time and the dwarf is ungrateful.

Then one day, they meet the dwarf once again. This time, he is terrified because the bear is about to kill him. The dwarf pleads with the bear and begs it to eat the girls. Instead, the bear pays no heed to his plea and kills the dwarf with one swipe of his paw. Instantly, the bear turns into a prince. The dwarf had previously put a spell on the prince by stealing his precious stones and turning him into a bear. The curse is broken with the death of the dwarf. Snow-White marries the prince and Rose-Red marries the prince's brother.

All content from Kiddle encyclopedia articles (including the article images and facts) can be freely used under Attribution-ShareAlike license, unless stated otherwise. Cite this article:
Snow-White and Rose-Red Facts for Kids. Kiddle Encyclopedia.