The Luiseño Indians first encountered Europeans acting as missionaries, and the Luiseno allowed them to come through their community because they were literate. According to Father Jose Sanchez:

"Proceeding in the same direction, we stopped at Jaguara, so called by the natives, but by our people San Jacinto. This is the rancho for the cattle of Mission San Luis Rey de Francia, distant from Temecula about eleven or twelve leagues."

The reservation was given back to the Luiseňo after the United States Government took control of California. An Executive Order established the Soboba reservation June 19, 1883.

The members of the Soboba Band of Luiseno Indians have built a self-sustaining community. Their work includes agriculture and entertainment. Because of the businesses that they created, the economy of Soboba is strong.

The tribe has built their own schools, including Noli Indian School, which serves grades twelve. They have also created non-profit organizations and a charity with the money they have made from all of their businesses.

The Soboba began their economy with agriculture, starting with apricots. Over time, they developed the land surrounding the reservation. The members of the tribe worked their way outside of their own community and working in the citrus industry. This agricultural industry allowed them to build their economy and expand. 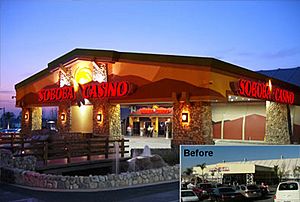 In the late 20th century, the Soboba established a gaming casino to earn profits for economic development and for the support of their people. Under California and federal gambling laws, they could operate a gaming casino on their reservation, which is sovereign territory.

This casino is a premier gaming spot in California for many. It is located about 100 miles (160 km) from Los Angeles, and it attracts people from all over California. Soboba Casino is the biggest source of income for the tribe, and continues to grow every day.

Soboba has also developed a country club, which hosts golf tournaments and has a condominium resort. This resort opened May 2008. From 2009 to 2012, the resort held the Soboba Golf Classic.

All content from Kiddle encyclopedia articles (including the article images and facts) can be freely used under Attribution-ShareAlike license, unless stated otherwise. Cite this article:
Soboba Band of Luiseno Indians Facts for Kids. Kiddle Encyclopedia.