Society Hill Synagogue is a synagogue located in the Society Hill section of Center City Philadelphia. The synagogue is home to a 300-household congregation with Shabbat and holiday services, a Hebrew school, a Playschool, adult education, social programs and arts and culture initiatives, social action opportunities, and community programming.

Society Hill Synagogue is located at 418 Spruce Street. The building was designed in 1829, and originally home to Spruce Street Baptist Church. Congregation Beth Hamedrash Hagadol Nusach Ashkenaz purchased the building in 1910. Within three years, the synagogue's official name was changed to the Roumanian American Congregation, also known as "Or Chodash-Agudas Achim" (New Light-Union of Brethren). The congregation was succeeded by Society Hill Synagogue, which continues to operate in and expand the historic property. The building entered the National Register of Historic Places in June 1971.

Former members of First Baptist Church commissioned architect Thomas U. Walter to design the building at 418 Spruce Street in 1829. Walter also served as clerk of the church and superintendent of the Sunday school. In 1851, the church was enlarged and a new façade with an attic story was designed by Walter with cupolas over the side bays of the façade. The congregation made additions to the rear of the building in 1871 and 1877.

Spruce Street Baptist Church moved to 50th and Spruce Streets in 1908, and in 1963 to Newtown Square where it continues as an active congregation.

The synagogue became commonly known as the Great Roumanian Shul (דיא גרויסע רומענישע שוהל). It served the Philadelphia Jewish Quarter's Eastern European Jews in general, and was the center for the city's Roumanian Jewish community and fraternal organizations, hosting meetings and speakers. The Roumanian synagogue hosted Dr. Wilhelm Filderman for a mass meeting during a visit to Philadelphia in March 1926.

Society Hill declined in the years following World War II. Immigrant Jewish communities assimilated, moved to suburbs, membership declined, and by the 1960s, the building had fallen into disrepair. 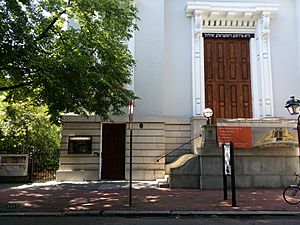 In the 1960s, a new community of Jews in the Society Hill neighborhood were looking for a spiritual home. This new congregation purchased the building in 1967.

Restoration began in 1968 under the supervision of architect Henry J. Magaziner. The restoration cost $300,000 and included updates to the 1830 building, repair of Walter's façade, and the addition of air-conditioning, a contemporary kitchen, and new social area. There were approximately 100 member families at the time.

Additional work in 1971 was directed by Cauffman, Wilkenson & Pepper, with John Milner. The building is listed as a Philadelphia City Landmark, and is on the state and National Registers of Historic Places. In 1985, architect James A. Oleg Kruhly designed a new addition. In 2005, the synagogue completed more than $80,000 worth of interior work, which included adding a permanent Beit Midrash. The synagogue purchased a building next door to add classrooms and offices in 2007 and in 2009 secured a grant for repairs to the envelope of the 19th century sanctuary and annex.

While the congregation has based its religious services on Conservative Jewish liturgy, it does not affiliate with a movement organization and self-defines as egalitarian.

Ivan Caine served as Rabbi from its founding in 1967 until 2001. In the mid-1970s, Rabbi Caine also served as a part-time Rabbi to Congregation Kesher Israel around the corner in the neighborhood. Cantor Alan Cohn served the synagogue from 1974 through 2000.

Avi Winokur served as rabbi from 2001 to 2020. Nathan Kamesar was hired as Associate Rabbi in 2018 and succeeded Winokur as senior rabbi in July 2020. Jessi Roemer has served as Cantor since 2018. The congregation now has 300 member households and over 100 children enrolled in Hebrew School, Hebrew High School, and Sunday school.

All content from Kiddle encyclopedia articles (including the article images and facts) can be freely used under Attribution-ShareAlike license, unless stated otherwise. Cite this article:
Society Hill Synagogue Facts for Kids. Kiddle Encyclopedia.