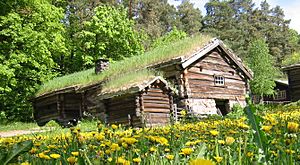 Sod roofs on log buildings of Norsk Folkemuseum in Oslo

A sod roof, or turf roof, is a traditional Scandinavian type of green roof covered with sod on top of several layers of birch bark on gently sloping wooden roof boards. Until the late 19th century, it was the most common roof on rural log houses in Norway and large parts of the rest of Scandinavia. Its distribution roughly corresponds to the distribution of the log building technique in the vernacular architecture of Finland and the Scandinavian peninsula. Sod is also a reasonably efficient insulator in a cold climate. The birch bark underneath ensures that the roof will be waterproof.

The term ‘sod roof’ is somewhat misleading, as the active, water-tight element of the roof is birch bark. The main purpose of the sod is to hold the birch bark in place. The roof might just as well have been called a "birch bark roof", but its grassy outward appearance is the reason for its name in Scandinavian languages: Norwegian and Swedish torvtak, Icelandic torfþak.

All content from Kiddle encyclopedia articles (including the article images and facts) can be freely used under Attribution-ShareAlike license, unless stated otherwise. Cite this article:
Sod roof Facts for Kids. Kiddle Encyclopedia.