The Soldiers' Monument is a controversial memorial monument at the center of the Santa Fe Plaza. It was erected as a 33 feet (10 m) stone cenotaph, consisting of an obelisk and a plinth during 1867-1868.

The square plinth includes four inscribed panels, three of which memorialized Union soldiers who died on the battlefields of New Mexico Territory in the American Civil War. The fourth panel on the monument memorialized US soldiers who died "in the various battles with savage Indians." The word "savage" was chiseled-off by an anonymous activist in 1974. In June, 2020 the panel was further damaged. On October 12, 2020, Indigenous People's Day the obelisk portion of the monument was toppled by protestors. 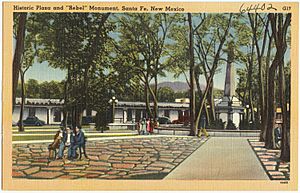 The plaza seen on a postcard in the 1930s

The monument site is at the crux of several paths through the plaza and is surrounded by an iron fence and banco seating. An interpretive plaque nearby explains the context:

Monument texts reflect the character of the times in which they are written and the temper of those who wrote them. This monument was dedicated in 1868 near the close of a period of intense strife which pitted northerner against southerner, Indian against white, Indian against Indian. Thus, we see on this monument, as in other records, the use of such terms as ‘savage’ and ‘rebel’. Attitudes change and prejudices hopefully dissolve. 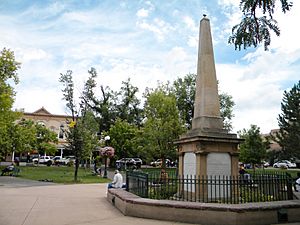 the monument in 2012, with chiseled section visible near base on left-facing side 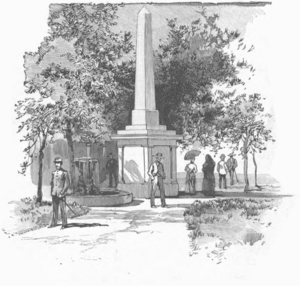 The monument consists of a 33-foot tall stone obelisk with four engraved marble plaques on the stone base commemorating U.S. soldiers who died in battles in New Mexico. It is located in the central area of the Santa Fe Plaza in downtown Santa Fe.

Written on the four sides of the cardinal directions of the plinth:

TO THE HEROES OF THE FEDERAL ARMY WHO FELL AT THE BATTLE OF VALVERDE, FOUGHT WITH THE REBELS FEBUARY 21, 1862

ERECTED BY THE PEOPLE OF NEW MEXICO THROUGH THEIR LEGISLATURES OF 1866 - 7 - 8. MAY THE UNION BE PERPETUAL.

as transcribed from the monument, January 2018 (the lacuna refers to where the word "SAVAGE" was chiseled off in 1974). The Battle of Cañon del Apache mentioned refers to a phase of the Battle of Glorieta Pass, March 26–28, 1862. Note that February 21 is misspelled as "FEBUARY 21" .

Like other similarly-named monuments (see Soldier's Monument), it was erected in the aftermath of the American Civil War. The inscription makes reference to the New Mexico Territorial Legislature, precursor to the post-statehood New Mexico Legislature, as being instrumental in the planning of the monument.

In August 1974, a young man wearing a hard hat walked into the plaza and chiseled out the word "savage" from the monument.

His identity has never been confirmed, although a woman claims it was her father.

Subsequently various unauthorised alterations have been made to the obelisk, including the markering of 'courageous' in 2014 over the area where 'savage' had been previously chiseled, and in 2020 further blunt damage to the side of the obelisk previously chiseled along with spray-painting over other parts.

On October 12, 2020 (Columbus Day or Indigenous Peoples' Day), protesters who had been at the Plaza since the previous day toppled the obelisk portion using ropes. Some arrests were made immediately prior to the toppling, although it is not clear if they resulted in immediate bookings; some injuries have been reported.

All content from Kiddle encyclopedia articles (including the article images and facts) can be freely used under Attribution-ShareAlike license, unless stated otherwise. Cite this article:
Soldiers' Monument (Santa Fe, New Mexico) Facts for Kids. Kiddle Encyclopedia.