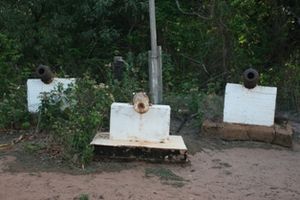 The old cannons at Somerset.

Somerset is a locality split between the Shire of Torres and the Northern Peninsula Area Region, Queensland, Australia. In the 2011 census, Somerset had a population of 0 people.

There is an historical ruin of Somerset homestead, a station established by John Jardine (father of Frank Jardine) in 1863 and is 35 km north of Bamaga on Cape York in Queensland, Australia. It is a good camping area and day trip with facilities for barbecues. It is situated near a beach.

All content from Kiddle encyclopedia articles (including the article images and facts) can be freely used under Attribution-ShareAlike license, unless stated otherwise. Cite this article:
Somerset, Queensland Facts for Kids. Kiddle Encyclopedia.