It is named for Antoine Soulard and Julia Cérre Soulard. Antoine Soulard first began to develop the land given to him by his father-in-law, Jean-Gabriel Cerré. Soulard was a surveyor for the Spanish government and a refugee from the French Revolution in the 1790s.

One of the oldest communities in the city, Soulard is today a largely residential neighborhood whose many businesses include restaurants, bars, and the North American headquarters of Anheuser-Busch, which houses the St. Louis Brewery. Half of the neighborhood north of Lynch Street is composed mostly of row homes and small apartments, with the Anheuser-Busch Brewery and headquarters occupying most of the land south of Lynch. Many of its houses date to the mid- to late-19th century. Soulard also has several historic churches.

Many of its bars host live music, especially the blues and jazz bands for which the city is known. The barrelhouse blues piano player James Crutchfield lived in the neighborhood from 1984 until his death in 2001 and performed in many of the nightclubs. The district hosts regular pub crawls. 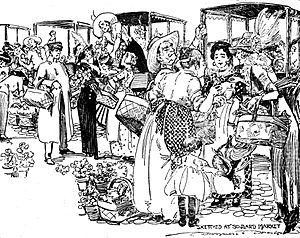 It is home to Soulard Farmers Market, the oldest farmers market west of the Mississippi. More than a hundred vendors include farmers, produce vendors, meat shops, spice shops, florist shops, and food.

Soulard hosts many events throughout the year, including celebrations of Mardi Gras and Oktoberfest.

Soulard hosts the St. Louis Mardi Gras festival, which sometimes attracts hundreds of thousands of revelers, largely depending on the weather. It has been said that St. Louis hosts the second-largest Mardi Gras party in the U.S.

Like the New Orleans celebration, the Soulard version features several parades during the Mardi Gras season. On the second Sunday before Mardi Gras, there is a family-oriented pet parade dubbed "Krewe of Barkus," which features people and costumed pets. The parade is followed by the informal Wiener dog races. On the Saturday evening before Fat Tuesday, the more adult-oriented flesh-for-beads parade occurs, although there have been various attempts to reserve a family section at one end of the route. The east-west streets of Soulard, Geyer, Allen, Russell, and others are crowded with people from 7th to 12th Street. Several VIP tents are available for admission by a fee, and, usually, a national recording artist performs for free on the main stage, usually on 7th St. In recent years, the parade has been moved just north of Soulard to downtown St. Louis.

All content from Kiddle encyclopedia articles (including the article images and facts) can be freely used under Attribution-ShareAlike license, unless stated otherwise. Cite this article:
Soulard, St. Louis Facts for Kids. Kiddle Encyclopedia.