South Quay Plaza is a residential-led development under construction in Canary Wharf on the Isle of Dogs, London, within the borough of Tower Hamlets developed by Berkeley Group Holdings and designed by architect Foster + Partners. The site of the development lies to the immediate north of Marsh Wall and to the immediate south of the financial district Canary Wharf. It is scheduled for completion in 2022.

The development includes three towers, of which the tallest, Hampton Tower, will reach a height of 214.5 m (704 ft); making it the second-tallest residential skyscraper currently proposed for London. There will also be new public and retail space, cafés and restaurants as part of the scheme.

The proposed scheme will be located in an area which was one of the first to be developed along Marsh Wall of any significance. South Quay 1 was constructed in 1986 and occupied by the Daily Telegraph until the Telegraph's move to Canary Wharf. The building then lay empty for some time. South Quay 1 was followed by South Quay 2 and then South Quay 3. For a time in the early nineties, these buildings dominated the area around Marsh Wall as offices until an IRA bomb in late Autumn 1996 which led eventually to the demolition of the original South Quay 1. Although originally scheduled for demolition, South Quay 2 remained until the Berkley scheme demolished it. South Quay 3 (189 Marsh wall) was re-skinned after the bomb and renamed Wyndham House. It is now called South Quay Building. 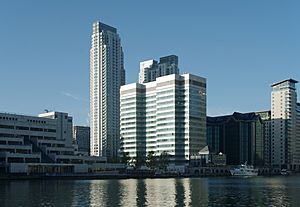 South Quay Plaza site, with Pan Peninsula in the background. The 15 storey building (centre) will remain

To make way for the new development, three buildings of two, three and ten storeys used for offices and retail will be demolished. A fifteen storey building on the site is being kept and refurbished.

183-189 Marsh Wall, South Quay, within the London borough of Tower Hamlets. The development is to the south of Canary Wharf and will overlook the South Dock which lies to the immediate north. The nearest station is South Quay DLR and the closest London Underground station is Canary Wharf.

All content from Kiddle encyclopedia articles (including the article images and facts) can be freely used under Attribution-ShareAlike license, unless stated otherwise. Cite this article:
South Quay Plaza Facts for Kids. Kiddle Encyclopedia.