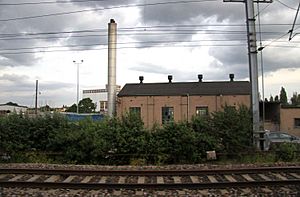 A workshop at the Southall Railway Centre

Southall Railway Centre is a non-publicised railway heritage centre at Southall in west London, near to Southall railway station and the Grand Union Canal. Formerly of the Great Western Railway the site is now run partly by Locomotive Services Limited and West Coast Railways, both of whom lease the site from Network Rail. The location is not open to the public.

The Great Western Railway Preservation Group (GWRPG) lease part of the West Coast Railway section of the site for their own use. 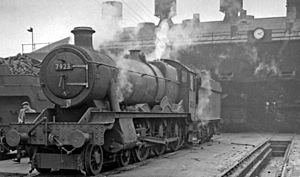 There has been a locomotive shed at Southall since 1859. Originally a Great Western Railway shed (Code: SHL), it was rebuilt as a six-road shed in 1884. Demolished in 1953, it was replaced by a more modern British Railways constructed steam shed (Code: 81C). Southall was the last London steam depot on the Western Region of British Railways, outlasting Old Oak Common and finally closing to steam in December 1965.

The depot was later used for DMU maintenance for ten years before final operational closure under British Rail. From 1993 to 1998, it was use as a base for the electrification programme for the Heathrow Express. 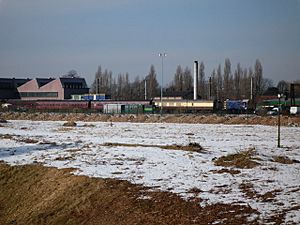 Currently the site, now referred to as the Southall Railway Centre, is used by three independent groups:

Some of these locomotives are at Southall, some are stored at other locations. There is also an assortment of goods and passenger rolling stock at Southall.

All content from Kiddle encyclopedia articles (including the article images and facts) can be freely used under Attribution-ShareAlike license, unless stated otherwise. Cite this article:
Southall Railway Centre Facts for Kids. Kiddle Encyclopedia.