The species has sexual dimorphism, with males being normally larger than females. Their weight ranges from 120 to 290 grams and are on average 233 mm in length, though their range is 209 mm to 258 mm. 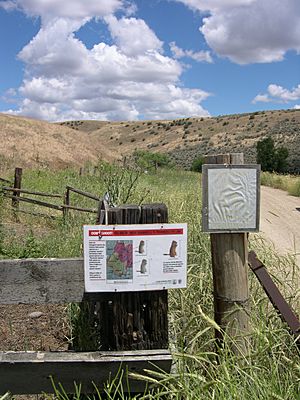 The southern Idaho ground squirrel can be found in an area about 30 by 70 kilometers (19 by 43 miles) extending from Emmett, Idaho, northwest to Weiser, Idaho and the surrounding area of Squaw Butte, Midvale Hill, and Henley Basin in Gem, Payette, and Washington counties.

Its range is bounded on the south by the Payette River, on the west by the Snake River and on the northeast by lava flows. Their habitat is typified by rolling hills, basins, and flats at an altitude of between 670 and 975 meters (2,198 and 3,199 ft).

All content from Kiddle encyclopedia articles (including the article images and facts) can be freely used under Attribution-ShareAlike license, unless stated otherwise. Cite this article:
Southern Idaho ground squirrel Facts for Kids. Kiddle Encyclopedia.