German naturalist Ludwig Koch described the southern tree-dwelling funnel-web spider from a female spider collected in Sydney, and erected the genus Hadronyche in 1873. The type specimen was housed at the State Museum of Natural History Stuttgart and destroyed during bombing in World War II. A neotype was subsequently selected in 2010 and is housed at the Australian Museum in Sydney. 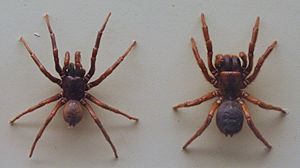 Male and female specimens on display in the Australian Museum

The southern tree-dwelling funnel-web spider has a glossy black carapace, matte black or dark brown chelicerae and legs, and a light maroon-brown to dark brown abdomen. 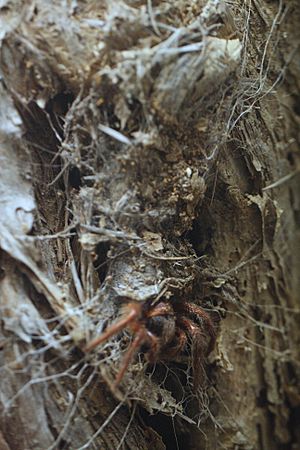 A female in its funnel on a tree stump, displayed in the Australian Museum

A high proportion of bites from the southern tree-dwelling funnel-web spider—three out of four recorded cases—result in severe symptoms of envenomation. The venom can be successfully treated with the antivenom for the related Sydney funnel-web spider (Atrax robustus).

Symptoms of envenomation can occur within 15–20 minutes. Applying pressure and a tourniquet can significantly delay the onset of symptoms and remains a critical part of the management of an Australian funnel-web spider bite. Despite the venom lacking the atraxotoxin or atraxin of A. robustus, the symptoms are very similar to those from a Sydney funnel-web spider bite. Common symptoms include diaphoresis (profuse sweating), hypertension (elevated blood pressure), sinus tachycardia (elevated heart rate), nausea, vomiting and local pain at the bite site. Pulmonary oedema (fluid build-up in the lungs) often comes on early.

All content from Kiddle encyclopedia articles (including the article images and facts) can be freely used under Attribution-ShareAlike license, unless stated otherwise. Cite this article:
Southern tree-dwelling funnel-web spider Facts for Kids. Kiddle Encyclopedia.