The Spanish Governor's Palace is a historic adobe from the Spanish Texas period located in Downtown San Antonio.

It is the last visible trace of the 18th-century colonial Presidio San Antonio de Béxar complex, and the only remaining example in Texas of an aristocratic 18th-century Spanish Colonial in−town residence. The National Geographic Society has named the landmark "the most beautiful building in San Antonio." The building was designated a National Historic Landmark in 1970. It is now owned by the city, and is open to the public as a museum.

The building was constructed in the early 18th century, planned as early as 1722 and completed in 1749. The keystone above the front entrance is marked with the coat-of-arms of Spanish King Ferdinand VI and the date 1749. The building was the residence and working offices of the local presidio captain at first. Later, it became the home of the Spanish governors who lived in San Antonio. The building later became the capitol building of the Texas region of Spanish Texas in 1772. The Spanish built the Presidio San Antonio de Béxar to protect the area's missions, including the San Antonio de Valero Mission (The Alamo) and the missions in the present day San Antonio Missions National Historical Park, as well as the growing Spanish colony. 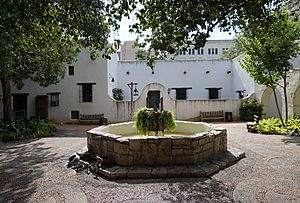 Garden outside the Spanish Governor's Palace

The one-story masonry and stucco structure features ten rooms, a grand courtyard and a fountain, and is alleged to be haunted.

The palace is located in between Market Square and the San Antonio River Walk near the current city hall. The address is 105 Military Plaza, San Antonio.

All content from Kiddle encyclopedia articles (including the article images and facts) can be freely used under Attribution-ShareAlike license, unless stated otherwise. Cite this article:
Spanish Governor's Palace Facts for Kids. Kiddle Encyclopedia.