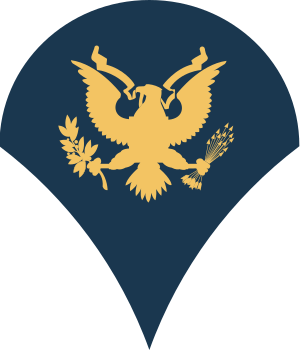 Specialist (abbreviated "SPC") is one of the four junior enlisted ranks in the U.S. Army. It is just above Private First Class and equivalent in pay grade to Corporal. Unlike Corporals, Specialists are not considered junior non-commissioned officers (NCOs).

In 1920, the Army rank and pay system received a major overhaul. All enlisted and non-commissioned ranks were reduced from 128 different insignias and several pay grades to only seven rank insignias and seven pay grades, which were numbered in seniority from seventh grade (lowest) to first grade (highest). The second grade had two rank titles: first sergeant, which was three stripes, two rockers, and a lozenge (diamond) in the middle; and technical sergeant, which was three stripes and two rockers. By World War II, the rank of first sergeant had been elevated to first grade and a third rocker was added, with the lozenge in the center to distinguish it from master sergeant. The wearing of specialist badges inset in rank insignia was abolished, and a generic system of chevrons and arcs replaced them.

From 1920 to 1942, there was a rating (not a rank) for men of the sixth and seventh grades designated "private first class, specialist, or "private, specialist," that was graded in six classes (the lowest being sixth class and the highest being first class). They were considered the equal of a private first class or private in authority, but drew additional pay in relationship to the specialist level possessed on top of their base pay. The classes only indicated competency, not authority, and a specialist did not outrank another man of his respective non-specialist rank.

Officially, specialists wore the single chevron of a private first class because no special insignia was authorized to indicate their rank. Unofficially, a specialist could be authorized, at his commander's discretion, to wear one to six additional rockers (one rocker for sixth class, and a maximum of six rockers for first class) under their rank chevron to denote specialty level. Such insignia was commercially available through catalogs or the base Post Exchange (PX) and could also be ordered with inset trade badges.

On 8 January 1942, the rank of technician was introduced to replace the private/specialist rank, which was discontinued by 30 June 1942. This gave technical specialists more authority by grading them as non-commissioned officers rather than senior enlisted personnel. They were parallel to pay grades of the time, going up in seniority from technician fifth grade, technician fourth grade, and technician third grade. A technician was paid according to his grade, and was senior to the next lowest pay grade; however, he was outranked by the corresponding non-commissioned officer grade and had no direct supervisory authority (that is, that of a private) outside of his specialty. To reduce the confusion this caused in the field, an embroidered "T" insignia was authorized for wear under the chevrons on 4 September 1942. The rank was finally discontinued on 1 August 1948. 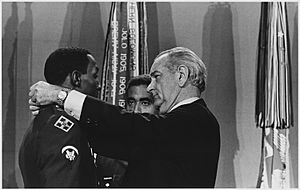 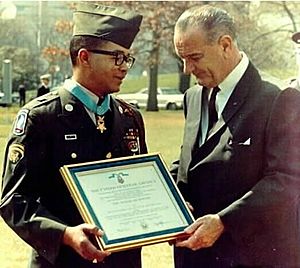 Photo of a U.S. Army Specialist 7

On 1 July 1955, four grades of specialist were established: Specialist third class (E-4 or SP3), specialist second class (E-5 or SP2), specialist first class (E-6 or SP1), and master specialist (E-7 or MSP). The insignia was yellow on a dark blue background. It was the same smaller size as women's NCO stripes—to differentiate specialists from NCOs, they were the same shape as NCO stripes—but were inverted to distinguish them, and the General Service Army Eagle was set in the center. The senior specialist ranks of SP2 (E5), SP1 (E6), and MSP (E7) were indicated by one, two, or three yellow arcs over the Eagle, respectively.

In 1956 the Army Green uniform was adopted. The enlisted stripes were changed from yellow on a blue backing to Goldenlite Yellow on a green backing. The specialist insignia was redesigned to be larger, broader, and more rounded.

These specialist ranks were created to reward personnel with higher degrees of experience and technical knowledge. Appointment to either specialist or non-commissioned officer status was determined by military occupational specialty (MOS). Different military occupational specialties had various transition points. For example, in the band career field (excluding special bands at D.C. and West Point), a bandsman could not achieve non-commissioned officer status until pay grade E-6 was attained. In some military occupational specialties, a soldier was appointed either a specialist or non-commissioned officer depending on which particular position or "slot" that he filled in his organization. A cook was a specialist, while a mess steward held the rank of sergeant (E-5 through E-7).

Specialist grades paralleled the corresponding grades of non-commissioned officer (E-4 through E-7) only in terms of pay. The specialist grades, although they outranked the enlisted grades (E-1 to E-3), were outranked by all non-commissioned officers (E-4 to E-9) and lacked the authority conferred on an NCO. This is the major differentiation between a specialist and a "hard striper". 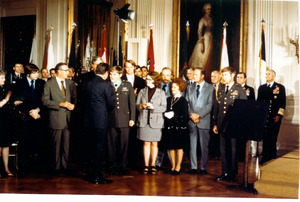 The Medal of Honor was awarded to SP4 Michael J. Fitzmaurice by President Richard Nixon at the White House, 15 October 1973.

Only the lowest specialist grade survives today and the rank of specialist 4 simply became known as "specialist", which is how it is referred to today. While the official abbreviation was changed from "SP4" to "SPC" upon the elimination of the SP5 and SP6 ranks, the SIDPERS database was initially authorized to continue using SP4 until such time as the change could be made at little or no additional expense in conjunction with other system upgrades. The continued use of SP4 on automatically produced documents (transfer orders, leave and earnings statements, unit manning reports, inter alia), hampered the adoption of the new abbreviation (and, to a lesser extent, the absence of "-4" in the non-abbreviated rank) by individual soldiers who viewed the computer-produced documents as the final word on what the proper term was.

Today, the rank of specialist is the typical rank to which privates first class are promoted after two years of service, although PFCs may be waived into the rank of specialist after 18 months' time in service and six months' time in grade. It is granted far more often than corporal (E-4), which is now reserved for personnel who have either passed the Basic Leader Course or have been assigned low-level supervisory duties (with two or more soldiers under direct command).

Specialists were informally called "specs" (pronunciation IPA: /ˈspɛk/ ) plus the numerical grade of their rank. Thus, a specialist 4 was called "spec 4". As of July 2016 the rank of Specialist is the most common rank in the U.S. Army, being held by 115,033 of the Army's 473,844 soldiers. This force wide prevalence has led to the humorous description of this pay grade as the "E-4/Spec4 Mafia".

New recruits enlisting into the United States Army who have earned a four-year degree, and as of 2006[update] those with civilian-acquired job skills, will enter as a specialist (pay grade E-4). Typically, newly recruited officer candidates hold the rank of specialist when enlisted and during BCT (basic combat training) prior to their official enrollment into OCS (Officer Candidate School) where they will be administratively promoted to the pay grade of E-5 but are referred to as "officer candidate" (OC) as opposed to sergeant (SGT).

Between 1941 and 1948, the United States Navy maintained an enlisted rate of Specialist in the petty officer pay grade structure. This was to absorb directly appointed civilian experts needed in the rapidly expanding Navy. A seaman would typically be known as a specialist followed by a letter indicating what field the specialty was held. For instance, a Specialist (C) served as a "classification interviewer", while a Specialist (T) was a "navy teacher", among several other specialist designations.

The concept was first proposed in late 1941 and was approved by the Secretary of the Navy sometime in November or December of that year. The Navy started with four specialties in February 1942, expanding to twenty-two specialties and their associated sub-specialties by the war's end in 1945. The Coast Guard added an additional five exclusive specialties in 1943 (D, CW, PR, PS and TR); four were awarded double letters to avoid duplication. The WAVES added Specialist (U) for "Utility"—a general purpose title that was abolished in 1944 and merged with the similar Specialist (X), for "Specialist (Not Elsewhere Classified)".

The trade badge was an embroidered diamond-shaped border inset with the specialty letter and set between the US Navy Eagle and the rank chevrons. Specialists 3rd, 2nd, and 1st Class (Grades 4, 3, and 2; equivalent to Petty Officers 3rd, 2nd and 1st Class) had 1 to 3 downward red chevrons. A Chief Specialist (Grade 1; equivalent to a Chief Petty Officer) had the US Navy Eagle perched on a red rocker over three red chevrons, with the diamond trade badge inset between the stripes.

The Navy's use of the specialist grade was reorganized in 1948 to integrate them into the petty officer structure. The assigned letters and job titles changed several times in the rank's history.

Some positions were reclassified as Emergency Service Ratings (ESRs) from 1948 to 1957 and Emergency Ratings (ERs) from 1957 to 1965. All personnel holding an Emergency Service rating were members of the Naval Reserve subject to activation only in time of war or national emergency. Their specialty letters had a prefix of "ES" added and were different than that of those in regular service.

A pruning and absorption or discontinuing of specialty ratings commenced between 1957 and 1964 and nearly all of the remaining specialties were discontinued in 1965. The sole remaining specialty was ESK (ES Specialty (K) – "Telecommunications Censorship Technician"). It was renamed "Information Security Specialist" in 1972 and disestablished in 1974.

All content from Kiddle encyclopedia articles (including the article images and facts) can be freely used under Attribution-ShareAlike license, unless stated otherwise. Cite this article:
Specialist (rank) Facts for Kids. Kiddle Encyclopedia.