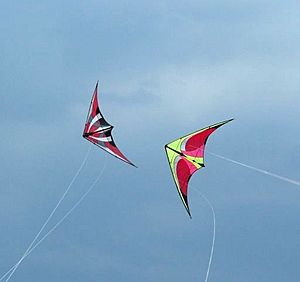 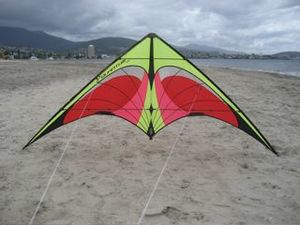 Commercially made dual-line sport kite on display, ready for launch

A sport kite, also commonly known as a stunt kite, is a kite that can be maneuvered in the air. A related kite, also controllable and used for recreation, but capable of generating a significant amount of pull and used for providing movement, is the Power kite.

One common configuration for a sport kite is a roughly triangular "delta" shape based on the Rogallo wing, with two lines for control. Another common configuration is a W-shaped panel based on the Hadzicki wing, with four lines for control. These kites are normally constructed from lightweight ripstop nylon or ripstop polyester with spars made from carbon fiber tubing. The flying lines are made from braided ultra-high-molecular-weight polyethylene, which is light, does not stretch under tension and stays slippery even when wrapped many times.

Dual-line sport kites are controlled by the pilot adding and releasing tension on the right and left lines. A pilot may pull on the right-hand line to turn right, pull left-hand line to turn left, pull equally for straight flight, push the left-hand line to release air and turn right, and so on. The pitch can be controlled by walking/running forward or backwards, giving the lines different amounts of tension. Using a combination of pulls and pushes (to give slack to the lines), complex tricks and patterns can be flown. These range in difficulty from turns, loops and landings, to maneuvers where the kite is flipped and turned end over end, wrapping the lines or floating on its front or back. During diving maneuvers sport kites may reach speeds of 100 km/h (60 mph), while in stall type maneuvers they can remain nearly motionless. This type of stall allows for various other acrobatic maneuvers to be performed.

Quad-line kites are controlled with a pair of handles, each with two lines attached to the top and bottom and attached to the kite correspondingly. To control the kite the pilot applies tension to the four lines, typically all four lines have some tension with some lines drawn back more than the others. The kite experiences more force on the lines held on higher tension. The pitch of the kite affects lift and forward drive, and since each of four lines can be moved the kite can be tilted, rotated, twisted, or pitched in any direction. Skilled use of these handles allows a quad-line kite to perform in ways that are difficult or impossible with a dual-line kite. Unique quad-line maneuvers include reverse flight, axis spins, hovers, and side to side flight.

There are three main categories of sport kites:

Traditional sport kites were most prevalent in the mid-90s and early 2000s. The kites were built for precision, and were often fairly large and generated a decent amount of pull. Such kites are considered "old school" today and they have largely be replaced with more agile designs capable of pitch tricks.

Trick kites became popular after the early 2000s. The kites sacrificed some precision for the ability to perform 3D acrobatic maneuvers. These kites have spawned a new free-style type of flying where the flyer strings together tricks. 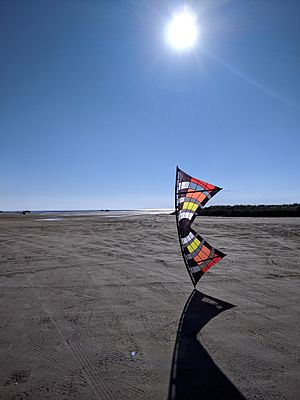 Quad-line kite hovering at a right angle while touching a wingtip to the ground.

Quad-line kites first hit the kiting scene in 1988 with the invention of the "Neos Omega", later called the "Revolution 1". Quad-line kites gained popularity after sport kite team The Flying Squad was formed in 1999 They were the first successful competition quadline team, winning back to back STACK European championships. Revolution initially dominated the quad-line market thanks to patent protections, but competing brands proliferated after the patents expired.

Quad-line kites are noticeable by the way that they can hover in space unlike any other sport kite. These kites can be extremely precise, hover in orientation, fly in any direction including sideways and reverse, even land at a specific spot on a wingtip.

Sport kites can be designed to fly in a wide range of conditions. Many standard kites fly best in winds from 1.5 to 6 m/s (5.4 to 22 km/h; 3.4 to 13 mph). "Ultralight" and "super ultralight" designs are made from lightweight materials that can be flown in the slightest breeze or even indoors with calm air. High wind kite designs are often made with mesh panels or an "air brake" attached to the lines to fly in higher winds up to approximately 20 m/s (72 km/h; 45 mph). Wind ranges depend significantly on the skill of the pilot; novice or first time fliers may have difficulty keeping a kite airborne believing the wind is too light while experienced pilots nearby are performing acrobatic tricks in the same wind. For smooth and consistent flying a steady breeze is required, uninhibited by trees, buildings, hills, or other tall objects which may block the wind. 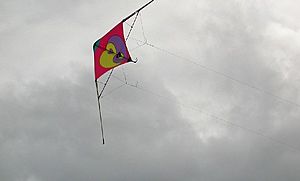 Two line sport kite shown from below. The control lines are visible from this vantage point.

Professional quality kites are made from multiple synthetic materials. Kite sails are primarily made from lightweight ripstop polyester which has been chemically treated to minimize stretch, repel water, increase airtightness, and be UV resistant. Edge material is often heavyweight Dacron or Kevlar to provide reinforcement and strength. Kite frames typically use wrapped carbon fiber tubes which are lightweight and stiff, yet can flex to absorb strong wind forces and survive hard crashes. Kite lines are made from ultra-high-molecular-weight polyethylene like Spectra or Dyneema woven specifically for kite line to have minimal stretch under tension and slip over itself even when wrapped over itself many times from kites spinning midair. Some have wingtip and tail weight attachments which change the flight characteristics of the kite, making some advanced maneuvers easier or more dramatic. Reinforcements and connectors may be made from nylon, Mylar, aluminum, and similar materials.

Some kite designs may be classified as power kites and traction kites, which can be used to tow wheeled kite buggies (kite buggying) or surfboards (kite surfing). Power kites vary in size from "trainers" which often have dual-lines and a small sail area, to large full size traction kites with four lines, designed to pull people on kite boards or vehicles. Many of these strong-pulling designs include a safety strap which can be engaged in emergencies to release or depower the kite, with some designs adding an additional (third or fifth) line for this purpose.

A molded kite case with line and accessories.

Many sport kite pilots have a variety of line sets, in different lengths and strengths (Measured in Lbs) to suit the wind conditions. Specialized kite bags are designed to tote a collection of kites, along with line sets and repair materials such as tedlar tape (for fixing punctured sails) and spare parts. Kite cases or bags also facilitate traveling with kites, some designed to fit into the overhead compartments on airplanes. Other accessories include hand-held (digital) anemometers for accurate wind speed information and LED lights that attach to the frame of the kite to allow for night flying. Some manufacturers offer replacement spars or spare components for their kites, for replacing damaged components after a particularly unforgiving crash landing. 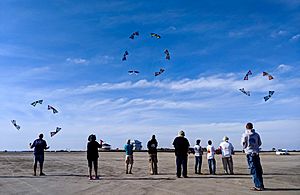 Developments in multi-line kites in recent years has allowed forms of kite flying to develop into a sport. Kite competitions have much in common with figure skating, with competitors being judged on their performance in compulsory figures as well as a "ballet", which involves artistic interpretation of music. Performances are done as individuals, a pair of pilots, or as a team. Team flying is typically the most spectacular, with typically four pilots flying within centimeters of each other and narrowly averting disaster, while performing all manner of figures and formations in the air.

Competitions are held nationally and internationally under the auspices of Sport Team and Competitive Kiting (STACK). There is a bi-annual World Championship which was last held at Berck sur Mer, France in April 2018, with the 2020 event cancelled due to the coronavirus pandemic. In the United States, the American Kitefliers Association (AKA) is the umbrella organization for sport kite contests; competition winners from the various regions are invited to the annual AKA convention for national championships. Other national organizations include FFVL France, FLD ev Germany, STACK Holland, STACK-Italia, and STACK-UK.

In 1996 the AKA, STACK, and All-Japanese Sport Kite Association (AJSKA) formed the International Rule Book Committee (IRBC) to standardize rules and processes.

All content from Kiddle encyclopedia articles (including the article images and facts) can be freely used under Attribution-ShareAlike license, unless stated otherwise. Cite this article:
Sport kite Facts for Kids. Kiddle Encyclopedia.