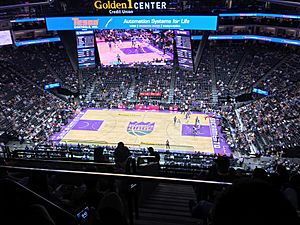 A Sacramento Kings basketball game at the Golden 1 Center 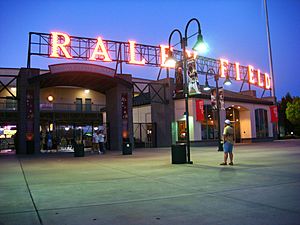 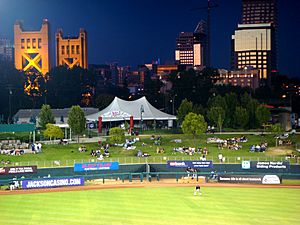 View of the city skyline from Raley Field

Sacramento hosted the 2000 and 2004 USA Olympic Track & Field Trials. The California International Marathon (est. 1983) finishes in front of the Capitol, and attracts a field of international elite runners who vie for a share of the $50,000 prize purse. The fast point-to-point course begins in Folsom and is popular for runners seeking to achieve a Boston Marathon qualifying time and fitness runners. The Sacramento Mile is a national flat-track motorcycle racing event. From 1961 to 1980, Sacramento hosted the Camellia Bowl, which selected or helped select ten national champions in college football's lower divisions.

Sacramento hosts some recreational facilities and events. The Jedediah Smith Memorial Trail that runs between Old Sacramento and Folsom Lake grants access to the American River Parkway, a natural area that includes more than 5,000 acres (20 km2) of undeveloped land. It attracts cyclists and equestrians from across the state. The California State Fair is held in Sacramento each year at the end of the summer, ending on Labor Day. In 2010, the State Fair moved to July. More than one million people attended this fair in 2001.

Among other recreational options in Sacramento is Discovery Park, a 275-acre (1.1 km2) park studded with stands of mature trees and grasslands. This park is situated where the American River flows into the Sacramento River.

All content from Kiddle encyclopedia articles (including the article images and facts) can be freely used under Attribution-ShareAlike license, unless stated otherwise. Cite this article:
Sports in Sacramento, California Facts for Kids. Kiddle Encyclopedia.