Spring Street (originally Calle Primavera) in Los Angeles is one of the oldest streets in the city. Along Spring Street in Downtown Los Angeles, from just north of Fourth Street to just south of Seventh Street is the NRHP-listed Spring Street Financial District, nicknamed Wall Street of the West, lined with Beaux Arts buildings and currently experiencing gentrification. This section forms part of the Historic Core district of Downtown, together with portions of Hill, Broadway, Main and Los Angeles streets. 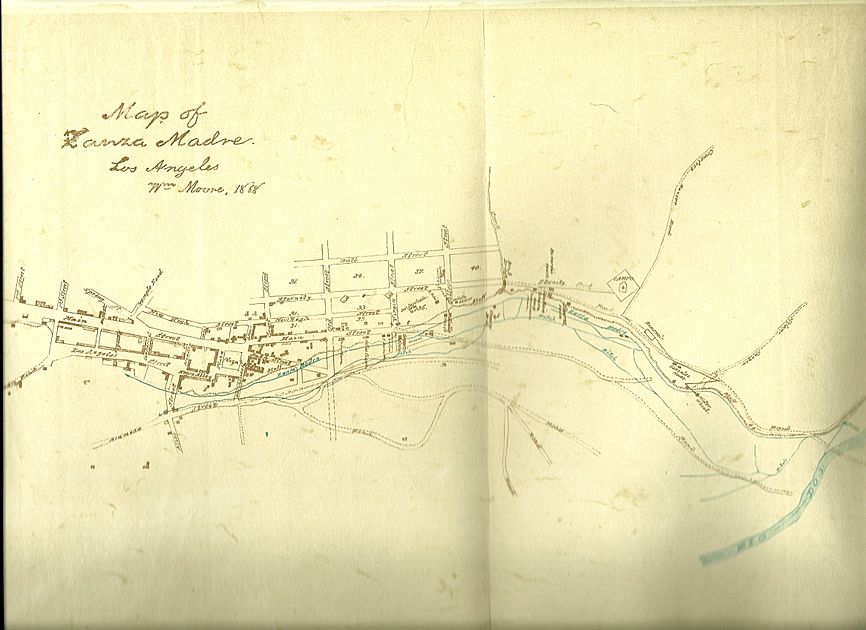 Spring and Eternity streets on an 1868 map

The historic district includes 23 financial structures, including the city's first skyscraper, and three hotels all located along a stretch of South Spring Street from just north of Fourth Street to just south of Seventh Street. In the first half of the 20th Century, this stretch of Spring Street was the financial center of Los Angeles, with the important banks and financial institutions being concentrated there. At least ten of the buildings in the district were designed in whole or in part by John Parkinson, who designed many of the city's landmark buildings in the early 20th century, including the Los Angeles Memorial Coliseum, Los Angeles City Hall, Bullocks Wilshire, and Union Station. Ten of the buildings in the district have been designated as Historic-Cultural Monuments by the Los Angeles Cultural Heritage Commission.

Due to the large percentage of historic bank and financial buildings that remain intact in the district, the area was listed on the National Register of Historic Places in 1979. The Los Angeles Conservancy offers walking tours of the Spring Street Financial District on the fourth Saturday of each month at 10 a.m.; the tour lasts approximately 2-1/2 hours and costs $10 for the general public (reduced rate for Conservancy members).

The city's central business district (CBD) in the 1880s and 1890s lay further north near South Spring and Temple Streets.

The street can claim credit as the birthplace of the motion picture business in Los Angeles. In 1898, Thomas Edison filmed a 60-second film titled "South Spring Street Los Angeles California", mounting a giant camera on a wagon to film the bustling action along South Spring Street.

Wall Street of the West

In the early 1900s, the city center began spreading south, and the city's banks and financial institutions began concentrating along South Spring Street. The first two important buildings to make the move south were the Hellman and Continental Buildings, with the Continental Building being considered the city's first skyscraper. In 1911, the Los Angeles Times boasted about the building boom on Spring Street:

The visitor to this city can at this moment observe skyscrapers in all stages of construction. It is a study which will provide the most comprehensible kind of answer to the query as to why Los Angeles is leading San Francisco, Portland, Seattle, St. Louis, Pittsburgh, Cleveland, Cincinnati, Baltimore, Detroit, Minneapolis, New Orleans, Boston, Buffalo and all other cities of anything near her in building activity as revealed by the monthly expenditures for construction work.

In the 1960s, many of the banks and financial institutions began moving to the western part of the downtown area, along Figueroa Street and Wilshire Boulevard. In 1982, the Los Angeles Times commented on the district's decline from "Wall Street of the West" to a blighted area with empty office buildings lining both sides of the street:

"When the banks and law firms moved to the 'Gold Coast' typified by Arco Towers, six blocks to the west, Spring Street plummeted to become a neighborhood of hoodlums, derelicts and winos—a neighborhood of echoing buildings full of absolutely nothing above the ground floor."

Since the early 1980s, South Spring Street has been the subject of numerous redevelopment projects. In recent years, numerous art galleries have moved into the old financial district, which is now known as Gallery Row. Many of the old bank buildings have also been converted into upscale lofts. As wealthier residents have moved into the district's lofts, older residents and artists have complained about the increased rents. One artist who had lived in the district for years said:

The real problem with downtown lately, Gronk and his friends half-jokingly agreed is 'those people.' Westsiders. Trust-fund babies. New tenants who demand their bohemian pleasures be liberally sweetened with suburban amenities. Landlords who previously recruited artists to help make downtown 'safe' for gentrification, then jacked up their rents so only lawyers and screenwriters could afford it.

The strength of the district remains its period architecture. Many of the Beaux Arts façades along Spring Street remain virtually intact, making the district a popular shooting location for motion picture and television productions seeking authentic period cityscapes. In 1985, noted Los Angeles Times columnist Jack Smith pointed to the Spring Street Financial District as proof that "Los Angeles was never the cultural wasteland it was alleged to be." He hailed the district's "financial palaces" as "a solid architectural achievement" which give the street "beauty, strength, unity and dignity."

Buildings and sites in the district

Notable buildings in the district (from north to south) include: 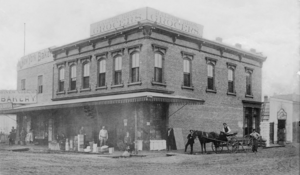 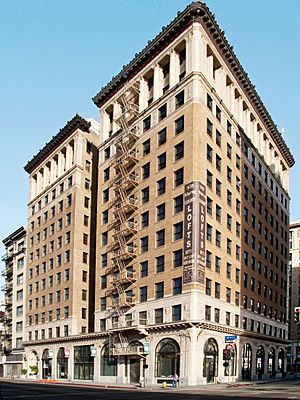 Just south of the Historic District but included here for convenience. Built in 1924, the 12-story Beaux-Arts building at 810 S. Spring St. (southeast corner of 8th St.) was designed by Walker & Eisen as the headquarters of National City Bank of Los Angeles, and was designated a Historic Cultural Landmark (HCM #871) in 2007. It was converted from offices to 93 residential units plus retail space in 2008, and was renamed the National City Tower.

Downtown north of the historic district

North of the historic district, Spring Street passes through the Civic Center district along government buildings built since the 1920s. However, this area was the heart of the city's business district around the 1880s and 1890s, nearly all of which was demolished.

West side of Spring south of Temple

Along the west side of Spring Street were the following buildings. Spring was realigned in the 1920s and now runs west of these sites, and the sites where these buildings once stood are now part of the full city block on which City Hall stands:

At the northwest corner of Franklin and Spring stood two buildings in succession, the Rocha Adobe, then the Phillips Block. The site now lies under the current course of Spring Street, which was straightened, i.e. realigned to run further west, in the 1920s.

At the southwest corner of Franklin Street from 1894–1905 was Harris & Frank's London Clothing Co. with its landmark clock. Harris & Frank went on to become a chain of junior department stores for men's clothing across the region.

East side of Spring south of Temple

The triangular space where Spring and Main Streets came together at the south side of Temple Street was the site of Temple Block: actually a collection of different structures that occupied the block bounded by Spring, Main and Temple. The first or Old Temple Block built by Francisco (F. P. F.) Temple in 1856, was of adobe, two stories, facing north to Temple. This was incorporated into a later, expanded Temple Block in 1871, and then demolished. George P. McLain wrote that upon his arrival in the town in 1868, Temple Block had been the undisputed center of commerce and social life in the town. Even into the early 1880s, it was considered the city's most stately building. It housed many law offices, including those of Stephen M. White, Will D. Gould and Glassell, Chapman and Smith. The block had a key role in the retail history of Los Angeles, as it was the first home to several upscale retailers who would become big names in the city: Desmond's (1870–1882) and Jacoby Bros. (1879–1891). It was also home to the Odd Fellows, the Fashion Saloon, the Temple and Workman Bank, Slotterbeck's gun shop, the Wells Fargo office. The northeast corner was home to Adolph Portugal's dry goods store (1874-1879?), Jacoby Bros. (1879–1891) and Cohn Bros. (1892–1897), in succession.

In 1925-7 this block and other surrounding areas were demolished to make way for the current Los Angeles City Hall.

Along the south side of Temple Block was Market Street, a small street running between Spring and Main.

Taking up the small block immediately south of Temple Block between Market and Court streets, facing both Spring and Main streets, were two buildings in succession:

The image at above left looks south past the intersection of First and Spring sometime around 1900–1906. The spire of the Wilson Block is prominent on the left, as is the Nadeau Hotel on the right. In the foreground we can see the Los Angeles National Bank to the left and the Larronde Block to the right. From First to Second streets, Spring Street is still a busy shopping district, though Broadway is also just becoming popular for more upscale shopping. An electric streetcar heads to Griffin Avenue in Montecito Heights, on what would become Line 2 of the Los Angeles Railway. Today, this view would be of the 2009 LAPD Headquarters taking up the entire block on the left and on the right, the 1935 Los Angeles Times Building, and behind it, the 1948 Crawford Mirror Addition building.

Northwest corner of First and Spring

Northeast corner of First and Spring

First Street from Spring to Main

First Street east of Spring: Widney Block (i.e. Joseph Widney), built in 1883, along the north side. The main Olmsted & Wales bookstore was located in the block in the mid-1880s.

Southwest corner of First and Spring

Southeast corner of First and Spring

Northwest corner of Second and Spring

It was replaced by the 1948 Crawford Addition building, part of the Times Mirror Square complex, currently vacant.

Northeast corner of Second and Spring

Southwest corner of Second and Spring

Southeast corner of Second and Spring

On the west side:

On the east side:

Northwest corner of Third and Spring

Northeast corner of Third and Spring

Southwest corner of Third and Spring

Southeast corner of Third and Spring

All content from Kiddle encyclopedia articles (including the article images and facts) can be freely used under Attribution-ShareAlike license, unless stated otherwise. Cite this article:
Spring Street (Los Angeles) Facts for Kids. Kiddle Encyclopedia.