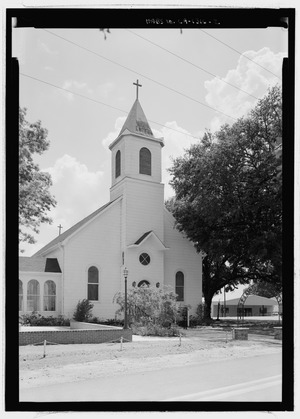 View of the church from the Historic American Buildings Survey, date unknown

St. Augustine Catholic Church and Cemetery, or the Isle Brevelle church, is a historic Roman Catholic church and cemetery located in Melrose, Natchitoches Parish, Louisiana. It is the cultural center of Cane River's historic Créoles of color community.

Established as a mission church in 1829, by mixed-race freedman Nicolas Augustin Metoyer, St. Augustine is celebrated as the first church in Louisiana to be built by and for free people of color. It is among the oldest churches founded and built by and for people of African descent in the United States.

The church and cemetery are within the Cane River National Heritage Area, and are listed on the National Register of Historic Places. Because of its significance to Catholic and Créole history, St. Augustine also is a marked destination on the Louisiana African American Heritage Trail.

Tradition holds that the church was established by Nicolas Augustin Metoyer in 1803 and that services have been held continuously since then. Historical records challenge the local lore. Parish records document the founding of the Chapel of St. Augustine "as a mission of the church of St. François of Natchitoches" in July 1829, shortly after the church was constructed. The mission was recognized in 1856 as a parish in its own right, and authorized a resident priest.

When Father Jean Baptiste Blanc consecrated the chapel for religious use (19 July 1829), he reported that it had been "erected on Isle Brevelle on the plantation of Sieur Augustin Metoyer through the care and generosity of the above-named Augustin Metoyer, aided by Louis Metoyer, his brother. ... The said chapel ... having been dedicated to St. Augustine, shall be considered as under the protection of this great doctor." Tradition also describes the role of Augustin's brother Louis (founder of the nearby Melrose Plantation, a National Historic Landmark ), as the chapel's designer and builder.

The Church of St. Augustine is distinctive among Southern churches of all denominations for its racial role reversals. Surviving pew records show that the front seats were occupied by the Créole de couleur Metoyer family who built the chapel. Seated behind them were the families of prominent white planters within the community. Post-Civil War, St. Augustine chalked up another apparent first in U.S. racial history: its own congregation by this time was almost exclusively people of color; but, it served as the mother church for the predominantly white congregation of Mission Ste. Anne on Old River.

The original structure has not survived. Union forces during the Red River Campaign of May 1864 were said to have torched the first church.

A second church burned in the early 1900s. It was replaced by the present-day church building, which was completed in 1917. Tradition holds that early furnishings included paintings of patron saints Augustine and Louis in honor of the Metoyer brothers, as well as an altar brought from Europe by other family members. The original bell that hung in the belfry above the vestibule is said to be the one still in use. An image of the original church survives as a backdrop in the contemporary oil portrait of its founder that hangs in the church today.

The Metoyer brothers were two of ten children of the French merchant Claude Thomas Pierre Metoyer and the former slave Marie Thérèse Coincoin, sometimes (albeit erroneously) called Marie Thérèse Metoyer. He had initially leased her services as a domestic and concubine. When the parish priest filed charges against the black Coincoin for bearing mixed-race children while living in the residence of a white man, and threatened to sell her away to New Orleans, Metoyer bought her from her owner and privately manumitted her. Across the next thirty-seven years, he manumitted each of their children.

Coincoin, as a médecine, planter, and businesswoman, worked to buy the freedom of her five older black children from an earlier union with another slave. She secured that freedom for three of them. Together, her offspring and their families created a large Créole of color community in Natchitoches Parish that spread the length of Cane River Lake.

Its core would be, and still is, St. Augustine Parish on Isle Brevelle.

All content from Kiddle encyclopedia articles (including the article images and facts) can be freely used under Attribution-ShareAlike license, unless stated otherwise. Cite this article:
St. Augustine Parish (Isle Brevelle) Church Facts for Kids. Kiddle Encyclopedia.