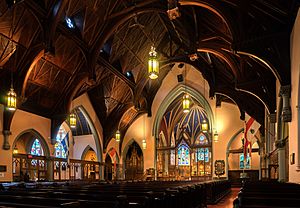 St. George's Anglican Church is a heritage church located in the city's downtown core of Montreal, Quebec, Canada. The church is on Stanley Street on the corner of De la Gauchetière Street, although it also faces Peel Street and is opposite Place du Canada.

The church is named for Saint George, the patron saint of England. St. George's Anglican Church was designated as a National Historic Site of Canada in 1990.

The original St. George's Church opened on June 30, 1843, and was on Notre-Dame Street (then Saint Joseph Street) and Saint David's Lane, just outside the city of Montreal's walls. It was the second Anglican congregation in Montreal and was built to accommodate the overflow of parishioners from Christ Church Cathedral. An organ built by Samuel Russell Warren was installed later that year.

The congregation of St. George's continued to grow as the city expanded to the west. A plot of land at the corner of Peel Street and De la Gauchetière Street was chosen as the site of the current church. This piece of land had been a Jewish cemetery from 1775 to 1854. St. George's was designed by Montreal architect William Tutin Thomas, constructed in 1869, and opened its doors on October 9, 1870. The only furnishing retained from the old church was the pulpit. The old church would serve as a factory for organ-maker Samuel Russell Warren.

The parishioners of St. Jude Church (corner of Coursol Street and Vinet Street in Little Burgundy) and Church of the Advent (corner De Maisonneuve Boulevard and Wood Avenue in Westmount) joined those of St. George's following their churches' closures.

The church serves as an example of English Gothic Revival architecture, and was very heavily inspired by 13th-century religious architecture in medieval England. A few of these features include the use of pointed arches and pinnacles.

The bell tower was completed in 1894 and designed by Montreal architect Alexander Francis Dunlop.

The exterior was constructed in carved sandstone with stained glass windows, and the interior is devoid of any pillars, and features traditional English woodwork inside the chapel. The church is also notable for its ceiling beams, which are among the largest in the world. The exposed double-beam hammer roof is second in the world only to the Westminster Hall in span. The tapestry originates from Westminster Abbey in London, where it was used during the coronation of Queen Elizabeth II.

The three-light congregational war memorial window by Charles William Kelsey depicts angels holding shields representing the Navy, Army, and Air Force. Below the Army panel is written "He will swallow up death in victory and the Lord God will wipe away all tears from all faces, Isaiah 25:8." Below the Air Force Panel is written "Out of weakness made strong, waxed valiant in fight, turned to flight the armies of the aliens, Hebrews II:34". Below the Navy Panel is written "They that go down to the sea in ships, these see the works of the Lord and His wonders of the deep, Psalm 107:23".

All content from Kiddle encyclopedia articles (including the article images and facts) can be freely used under Attribution-ShareAlike license, unless stated otherwise. Cite this article:
St. George's Anglican Church (Montreal) Facts for Kids. Kiddle Encyclopedia.