St. Gobnet's Church is located in the northern part of Inisheer, in the Aran Islands.

The site is believed to have been in use since the 6th century. According to traditional tales, Saint Gobnait fled from County Clare to Inisheer to escape a family feud. Later, an angel appeared to her and told her to return to the mainland and go south until she saw nine white deer; she settled at Ballyvourney and built a religious community. The remains of her beehive cell are said to be on Inisheer. The stone church was built in the 11th or 12th century. 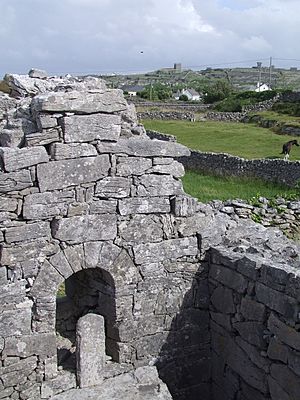 A rectangular stone church. The remains of a beehive hut are visible; there are also two bullaun stones and three raised stone slabs.

All content from Kiddle encyclopedia articles (including the article images and facts) can be freely used under Attribution-ShareAlike license, unless stated otherwise. Cite this article:
St. Gobnet's Church Facts for Kids. Kiddle Encyclopedia.