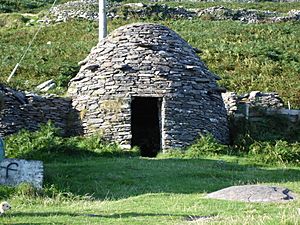 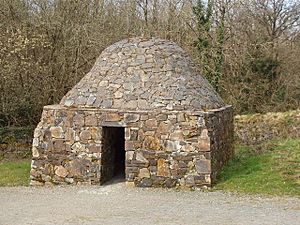 A reconstruction of a square-shaped beehive hut at the Irish National heritage Park, County Wexford

A clochán, or beehive hut, is a dry-stone hut with a corbelled roof, commonly associated with the south-western Irish seaboard. The precise construction date of most of these structures is unknown with the buildings belonging to a long-established Celtic tradition, though there is at present no direct evidence to date the surviving examples before c.AD 700". Some associated with religious sites may be pre-Romanesque, he considers most fully intact structures to date after the 12th century or later. It is where monks lived.

They are most commonly round beehive huts, but rectangular plans are known as well. It has been suggested that the rectangular footprints date to a later era. Some clochans are not completely built of stone and may have possessed a thatched roof. The walls are very thick, up to 1.5 metres (4 ft 11 in). Sometimes several clochans are joined together by their walls.

Clochans are mainly found in the Southwest of Ireland, for example at Skellig Michael, Church Island off Beginish Island, Glanfahan, Fahan and Reask in the Dingle Peninsula of County Kerry. Many occur in religious contexts such as used by the monks following Saint Patrick; moreover, his successors carried on the architectural tradition in the Scottish island of Iona and eventually via Aidan to the eastern English islands of Farne and Holy Island. There are others in ringforts (such as Leacanabuaile, County Kerry) that are commonly interpreted as secular dwellings. Elaborate dry walled stone churches like the Gallarus Oratory may derive from clochans. The clochan has been described in the 7th to 8th-century law Críth Gablach.

All content from Kiddle encyclopedia articles (including the article images and facts) can be freely used under Attribution-ShareAlike license, unless stated otherwise. Cite this article:
Clochán Facts for Kids. Kiddle Encyclopedia.