St. John The Baptist Roman Catholic Church is a historic church at Ohio 694 and Main Street in Glandorf, Ohio. It was built in 1875 and added to the National Register in 1977.

In 1834, Father Johann Wilhelm Horstmann and other settlers immigrated from Glandorf, Germany, to Putnam County, Ohio. They acquired a tract of land from the government, and established the town of Glandorf along and the first Catholic church in Putnam County. The church building was a 16 ft (4.9 m) by 18 ft (5.5 m) log cabin that also served as a residence for Father Horstmann.

The congregation quickly outgrew the original building and, in 1837, a larger hewn-log church was dedicated to St John the Baptist. Father Horstman died in 1843 and Father Bohne, who took over the parish, began construction of a brick church building. Shortly afterward, the parish put under the control of the Sanguinist Fathers and, in 1848, a convent was established.

The current church building was built in 1875 and dedicated in 1878. It was designed by Cudell & Richardson, and it was the largest Roman Catholic church in Ohio at the time. The church is built in the Neo-Gothic style and has a 225-foot spire. It contained "figurines from Austria, stained glass windows imported from Munich, Germany, and a highly detailed pulpit which was purchased for $1,400 at the Centennial Exposition in Philadelphia", according to Michael Leach, who wrote a book on the church's history. Pioneer cemetery, which holds the grave of Father Horstmann, sits beside the church.

In 1977, the church was added to the National Register.

In 2015, the parish opened a museum to display the history of the church and the town of Glandorf. 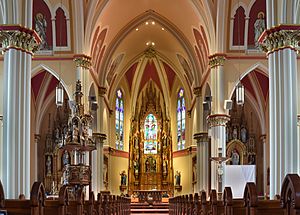 In 2017, the church underwent a 3-month restoration and improvement project. The $1.2 million project involved preventive measures such as fiberglassing the interior walls, painting, and installing updated storm windows to protect the stained glass. In addition, a lowered ceiling in the vestibule was removed to uncover a stained glass window. The work was carried out by Conrad Schmitt Studios of New Berlin, Wisconsin.

All content from Kiddle encyclopedia articles (including the article images and facts) can be freely used under Attribution-ShareAlike license, unless stated otherwise. Cite this article:
St. John the Baptist Catholic Church (Glandorf, Ohio) Facts for Kids. Kiddle Encyclopedia.