St. Joseph's Church, Cardiff, is a Roman Catholic church in Cardiff, Wales. It is administered by the Rosminians. It serves the areas of Gabalfa, Cathays, and Maindy. 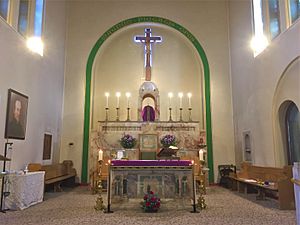 The sanctuary, as viewed from the central aisle.

The Rosminians arrived in Cardiff in 1854. They first established St. Peter's Church, Roath, and St. Alban's Church, Splott. The first church building of St. Joseph's used parts from an Iron Church at St. Alban's parish, which had a new building in 1911. This opened on shrubland in Gabalfa on 1st June 1913, served by priests from St. Peter's parish. In 1921, it became an independent parish, serving around 1,000 Catholics.

The presbytery building was completed later in 1927.

The current church building received funding in 1934 from an £11,000 donation from Thomas Callaghan after the death of his wife Edith. It was designed by the architect F. R. Bates, with rounded arches and red-brown brick construction. This opened on 28th October 1936. It has a baptistery, bell tower, choir loft, and aisled nave.

The interior of St. Joseph's church was changed significantly after the Second Vatican Council. The church hall was added in the late 2000s. 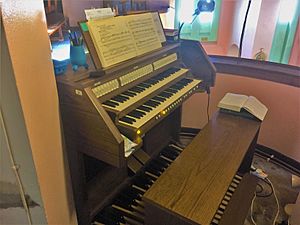 The current Viscount electric organ at St. Joseph's in the choir loft.

The organ at St. Joseph's was built in 1947 by Conacher and Co, with 6 ranks of pipes. This organ remained in the church until 2008. when water damage meant that the organ was scrapped. It was replaced with an electric organ in 2008.

All content from Kiddle encyclopedia articles (including the article images and facts) can be freely used under Attribution-ShareAlike license, unless stated otherwise. Cite this article:
St. Joseph's Church, Cardiff Facts for Kids. Kiddle Encyclopedia.