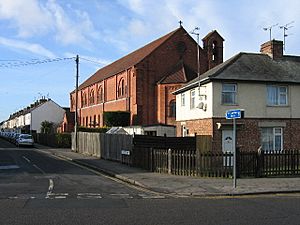 The Church of St. Augustine is an Anglican parish church in Even Swindon (also known locally as Rodbourne), an area of the town of Swindon, Wiltshire, England. The church was built to serve the spiritual needs of people moving to Swindon because of the Great Western Railway Works. The building was designed by W A H Masters, who also designed St Luke's Church, Broad Street, Swindon, and St Philip's, Upper Stratton. The church is in the Diocese of Bristol and the province of Canterbury, and is dedicated to St. Augustine of Canterbury. 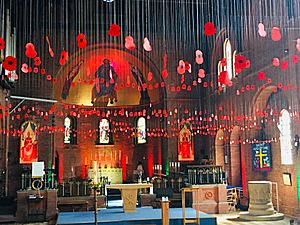 More than 1,000 poppies hanging through the church to commemorate the 100th anniversary of the Armistice

In what is thought to be a former church schoolroom built around 1873, the Rodbourne Cheney District Room became a mission chapel in the early 1880s within the parish of St Mary Rodbourne Cheney. The inventory records that the licence holding Divine Services was acquired on 2 April 1881. The earliest known record of a baptism dates from 1885.

The Rev W Mould, vicar of St Mary's and also chaplain to Queen Victoria, found difficulty in covering services at the chapel and made arrangements for St Mark's Church (another 'railway' church) to cover services and pastoral work.

On 26 October 1904, Rev Henry Harvey was licensed as missionary curate in St Augustine's district. He went on to serve the church in Rodbourne for a total of 29 years, was made Honorary Chaplain to the Bishop, and on completion of 25 years' service was made an Honorary Canon of Bristol Cathedral.

The foundation stone of St Augustine's was laid on 13 April 1907 amid much ceremony, and was the first time that the Freemasons in Wiltshire were involved in a church service. Building commenced at the East end and the church in its current state was consecrated on 25 January 1908.

The bricks were paid for by the parishioners and cost one old penny each. Sadly, money ran out and the side aisles, porches, bell tower and further chapels were never completed.

It is one of the few churches in the south of England, and one of two in Swindon, built in the basilica style, and consists of a large nave of six wide bays and apse with a walled choir surrounded by aisles. There is no physical division between nave and choir in the main building, so it is effectively a large hall. The vestry and lady chapel are at the northeast corner of the church.

The single bell weighs four and a half hundredweight, or 504 pounds (229 kg).

The font is an exact replica of the fine Norman font at St Leonard's Church Stanton Fitzwarren. It is divided into ten compartments, each with a Latin inscription. The first, Eclesia stands for the church – and the carving is of the crowned Divine Bride, holding the sacred chalice and killing evil (depicted as a serpent) with the stem of the cross. The second compartment, inscribed Cherubim shows a six winged cherubim, with its eyes covered to show its spiritual nature. The Cherubim holds a sword to show it is guardian of the Church. 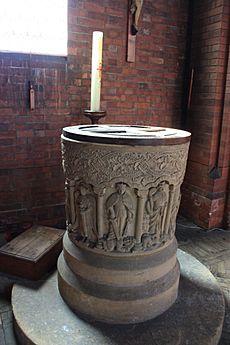 The other eight compartments show eight crowned knights holding shields and weapons. These represent the goodly Christian Virtues and they are depicted dwarfing figures, which represent the evil vices fighting in the baptised soul. Details of these remaining compartments are: 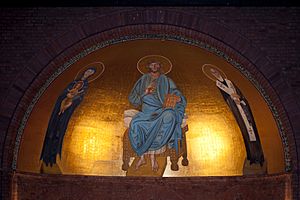 Apse painting at St Augustine's Church, Swindon, of Christ Pantocator with the virgin and child and St Augustine

Other artwork in the church includes the apse painting, two icons and two triptychs designed and painted by Fleur Kelly in the late 1980s and 1990s. The apse painting consists of the central figure of Christ Pantocator with Mary and Child and an elderly St Augustine. The icons to the sides of the apse are of Pope Gregory the Great and King Ethelbert of Kent. The triptychs are of the Virgin Mary and Child, and St Augustine holding a model of the current church.

There are six stained glass windows: three in the apse and the ocular window high in the nave above the apse arch date from the earlier years of the church. Two other windows on the South side are from the 1950s. The south window of St Peter is by Basil Barber, an apprentice of Sir Ninian Comper.

The church has a strong musical tradition, the choir of the early days consisted of a choir of men and boys numbering nearly 50. Women were allowed into the choir for the first time in the mid-1970s. The choir presented the nameplate of the steam engine "Westminster Abbey" to the choirboys there, and it can still be seen in the choir school to this day. The church returned to Westminster Abbey to commemorate the presentation in March 2015.

Sir John Betjeman was said to be a regular visitor to choral evensong and once hosted the choir at his Wantage Estate for a summer choir camp. The choir has previously sung in cathedrals and major churches including St Paul's, Westminster Abbey and St Mary Redcliffe and was well known in the locality for its size and quality.

The church has had two organs. The pipe organ of two manuals and 12 stops (896 pipes), built by Hele of Plymouth, was decommissioned in 2003, and most of the pipework and action has been removed except for the large Open Diapason display pipes, some pedal pipes and the bottom 12 notes of the Dulciana stop which are now displayed on the church floor.

The current organ is a two-manual digital organ of 33 speaking stops. This organ was donated to the church in 2003, and the church has had five recitals by Professor Ian Tracey, Organist Titulaire of Liverpool Anglican Cathedral. The speakers of the digital organ are positioned high up in the organ loft, about 30 feet (9.1 m) above the North stalls of the choir.

In 2018, a display of 1,300 poppies commemorated the 100th anniversary of the Armistice and the end of World War One. The poppies were made by pupils of Even Swindon Primary School and church members, and hung on thin lines so that they appeared to float above the congregation and visitor alike. Other displays included a cascade of knitted poppies over the font and from the high altar, "There but Not There" silhouettes, and information on the local men who never came home. Photos of the displays were included in most UK national newspapers and the church was used by BBC Points West for a live broadcast of their evening news programme on 9 November 2018, the Friday before Remembrance Sunday. The programme was anchored by Alex Lovell.

All content from Kiddle encyclopedia articles (including the article images and facts) can be freely used under Attribution-ShareAlike license, unless stated otherwise. Cite this article:
St Augustine's Church, Even Swindon Facts for Kids. Kiddle Encyclopedia.