St Columba's Presbyterian Church is a Presbyterian church at the corner of Venn and Keane streets in Peppermint Grove, a suburb of Perth, Western Australia, Australia. 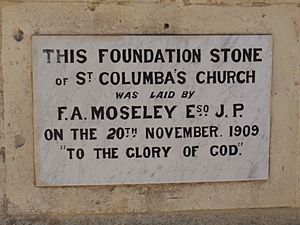 Plaque on the front wall of the church

The suburb of Peppermint Grove was originally predominantly Scottish, and thus Presbyterian. An earlier building, called the St Columba's Presbyterian Church Hall, was built on Venn Street in 1896. It was the first church building in Peppermint Grove and also acted as the only school in the neighbourhood until the construction of the Cottesloe State School.

A few years later, land on the corner of Venn and Keane Streets was donated by Alexander Forrest (1849–1901) to build the current church building. It was designed by architect Louis Bowser Cumpston (1865-1931).

Worship services take place every Sunday at 10am. The current Minister is the Rev. Dr. Kwangho Song.