St Dionis Backchurch was a parish church in the Langbourn ward of the City of London. Of medieval origin, it was rebuilt after the Great Fire of London to the designs of Christopher Wren and demolished in 1878.

The church of St Dionis was dedicated to Dionysus the Areopagite. The name Backchurch could have come from its standing behind other buildings, or from its position relative to the church of St Gabriel Fenchurch. It was in existence by the year 1288, when Reginald de Standen was recorded as being the rector. In 1466 the Alderman John Darby had an aisle added, in which he was buried.

The patronage of the church once belonged to the prior and canons of Christchurch, Canterbury and later passed to the dean and chapter of Canterbury Cathedral.

The church was destroyed in the Great Fire of London in 1666, and rebuilt to the designs of Christopher Wren in 1674 at a cost of £5,737. A tower, also to Wren's design, was added ten years later.

Wren’s church was 66 feet long and 59 feet wide. It was divided into nave and aisles by Ionic columns supporting an entablature. The ceiling of the nave was arched, and pierced with circular windows under groin vaulted openings, while the aisle ceilings were horizontal. There was a west gallery with an organ.

The bell tower was divided into three storeys by string courses. At the top was an open parapet, and a small bell turret which had been removed by the nineteenth century. The church was built mostly of stone, with some brick which was later stuccoed. The east end of the church, in Lime Street, had a pediment and two pairs of coupled Ionic pilasters with a large window below carved festoons. A row of shops, built against the south wall, stood between the church and Fenchurch street. A City of London commemorative plaque noting the year of demolition is attached to the wall of the buildings that now occupy the former site of St Dionis Backchurch, opposite number 24 Lime Street EC3. 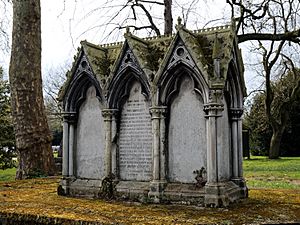 In 1858, the vestry asked the architect George Edmund Street to examine the fabric of the church. He found that the church was in need of substantial repairs and recommended that the most economical course of action would be to demolish the whole church except for the tower, and rebuild it to a Gothic design of his own. Before any such plans could be carried out, however, the vestry decided that the church was no longer needed. In 1878 the parish was merged with that of All Hallows Lombard Street under the Union of Benefices Act of 1860 and the church demolished.

While surveying the church, Street discovered that a fifteenth-century crypt had survived under the chancel of Wren’s church.

The church had a peal of ten bells, cast between 1726 and 1750. They were transferred to All Hallows Lombard Street when St Dionis was demolished.

A parish mark can be seen in Philpot Lane. The church of St. Dionis, Parsons Green was built with the proceeds of the sale of the site of the City church, and its font and pulpit survive there. The burials were reinhumed at the City of London Cemetery. 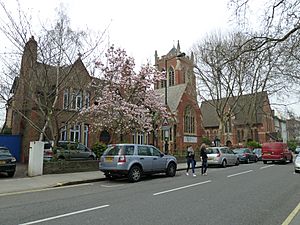 The modern reincarnation in Parsons Green

All content from Kiddle encyclopedia articles (including the article images and facts) can be freely used under Attribution-ShareAlike license, unless stated otherwise. Cite this article:
St Dionis Backchurch Facts for Kids. Kiddle Encyclopedia.