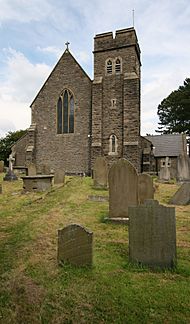 St Fagan's Church (Welsh: Eglwys Sain Ffagan) is a Grade II-listed Anglican church in the village of Trecynon near Aberdare, Rhondda Cynon Taf, Wales. It was originally built in the mid-nineteenth century in the Gothic Revival style, but burned down a few years later and was rebuilt.

The church was designed by the architect Thomas Talbot Bury of London (a former pupil of A. W. N. Pugin) and built between 1851 and 1853 at a cost of £1,795. However, it burnt down on 12 January 1856 and had to be rebuilt at a cost of £5,000. Both of these costs were met by Lady Harriet Clive (by 1856 widowed and known as Harriet Windsor-Clive, Baroness Windsor) of St Fagans Castle near Cardiff.

The building had a southwest tower added in 1909. It received a heritage listing of Grade II on 1 October 1991.

The church, in a Decorated Gothic style, has snecked Duffryn rubble walls with bath stone dressings, stepped buttresses with a slate roof, gables with parapets and crucifix finials. The interior has an aisled four-bay nave and a three-bay chancel with circular columns.

All content from Kiddle encyclopedia articles (including the article images and facts) can be freely used under Attribution-ShareAlike license, unless stated otherwise. Cite this article:
St Fagan's Church, Trecynon Facts for Kids. Kiddle Encyclopedia.