Aberdare ( ab-ər-DAIR; Welsh: Aberdâr) is a town in the Cynon Valley area of Rhondda Cynon Taf, Wales, at the confluence of the Rivers Dare (Dâr) and Cynon. The population at the 2001 census was 31,705 (ranked 13th largest in Wales). Aberdare is 4 miles (6 km) south-west of Merthyr Tydfil, 20 miles (32 km) north-west of Cardiff and 22 miles (35 km) east-north-east of Swansea. During the 19th century it became a thriving industrial settlement, which was also notable for the vitality of its cultural life and as an important publishing centre.

Aberdare dates from the Middle Ages. It was originally a small village in an agricultural district, centred around the Church of St John the Baptist, said to date from 1189. By the middle of the 15th century, Aberdare contained a water mill in addition to a number of thatched cottages, of which no evidence remains. In the early 19th century the population grew rapidly, owing to the abundance of coal and iron ore,: the population of the whole parish, 1,486 in 1801, increased tenfold during the first half of the 19th century.

Two major industries supported the growth of the community: first iron, then coal. A branch of the Glamorganshire Canal (1811) was used to transport these products; then the railway became the main means of transport to the South Wales coast. From the 1870s onwards, the economy of the town was dominated by the coal mining industry, with only a small tinplate works. There were also several brickworks and breweries. During the latter half of the 19th century, considerable improvements were made to the town, which became a pleasant place to live, despite the nearby collieries. A postgraduate theological college opened in connection with the Church of England in 1892, but in 1907 it moved to Llandaff. 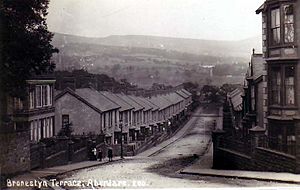 With the ecclesiastical parishes of St Fagan's (Trecynon) and Aberaman carved out of the ancient parish, Aberdare had 12 Anglican churches and one Roman Catholic church, built in 1866 in Monk Street near the site of a cell attached to Penrhys monastery; and at one time there were over 50 Nonconformist chapels (including those in surrounding settlements such as Cwmaman and Llwydcoed). The services in the majority of the chapels were in Welsh. Most of these chapels have now closed, with many converted to other uses. The urban district includes what were once the separate villages of Aberaman, Abernant, Cwmaman, Cwmbach, Cwmdare, Llwydcoed, Penywaun and Trecynon. There are several cairns and the remains of a circular British encampment on the mountain between Aberdare and Merthyr. Hirwaun moor, 4 miles to the north west of Aberdare, was according to tradition the scene of a battle at which Rhys ap Tewdwr, prince of Dyfed, was defeated by the allied forces of the Norman Robert Fitzhamon and Iestyn ap Gwrgant, the last Welsh prince of Glamorgan.

The parish population was 1,486 in 1801, but expanded fast, especially during the 1840s and 1850s: the population of the Aberdare District, centred on the town, was 9,322 in 1841; 18,774 in 1851; and 37,487 in 1861. This population growth, a result of the growth of the steam coal trade (see below) was increasingly concentrated in the previously agricultural areas of Blaengwawr and Cefnpennar to the south of the town. Many of the migrants came from the rural parts of west Wales which had been affected by an agricultural depression. Population levels continued to increase over the next forty years, albeit with a small decline in the 1870s. The first decade of the 20th century saw a further sharp increase, largely as a result of the steam coal trade, reaching 53,779 in 1911. The population has since declined owing to the loss of most of the heavy industry.

Welsh was the prominent language until the mid 20th century and Aberdare was an important centre of Welsh language publishing. A large proportion of the early migrant population were Welsh speaking, and in 1851 only ten per cent of the population had been born outside of Wales.

By 1901, the census recorded that 71.5% of the population of Aberdare Urban District spoke Welsh, but this fell to 65.2% in 1911. The 1911 data shows that Welsh was more widely spoken among the older generation compared to the young, and amongst women compared to men. A shift in language was expedited with the loss of men during the First World War and the resulting economic turmoil. English gradually began to replace Welsh as the community language, as shown by the decline of the Welsh language press in the town. This pattern continued after the Second World War despite the advent of Welsh medium education. Ysgol Gymraeg Aberdâr, the Welsh-medium primary school, was established in the 1950s with Idwal Rees as head teacher. 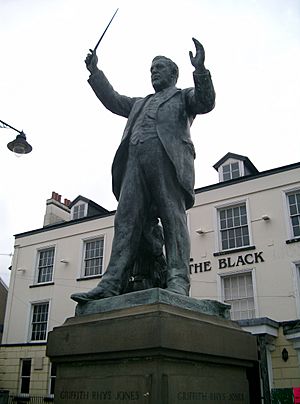 Aberdare, during its boom years, was considered a centre of Welsh culture: it hosted the first National Eisteddfod in 1861, with which David Williams (Alaw Goch) was closely associated. A number of local eisteddfodau had long been held in the locality, associated with figures such as William Williams (Carw Coch) The Eisteddfod was again held in Aberdare in 1885, and also in 1956 at Aberdare Park where the Gorsedd standing stones still exist. At the last National Eisteddfod held in Aberdare in 1956 Mathonwy Hughes won the chair. From the mid nineteenth century, Aberdare was an important publishing centre where a large number of books and journals were produced, the majority of which were in the Welsh language. A newspaper entitled Y Gwladgarwr (the Patriot) was published at Aberdare from 1856 until 1882 and was circulated widely throughout the South Wales valleys. From 1875 a more successful newspaper, Tarian y Gweithiwr (the Workman's Shield) was published at Aberdare by John Mills. Y Darian, as it was known, strongly supported the trade union movements among the miners and ironworkers of the valleys. The miners' leader, William Abraham, derived support from the newspaper, which was also aligned with radical nonconformist liberalism. The rise of the political labour movement and the subsequent decline of the Welsh language in the valleys, ultimately led to its decline and closure in 1934.

The Coliseum Theatre is Aberdare's main arts venue, containing a 600-seat auditorium and cinema. It is situated in nearby Trecynon and was built in 1938 using miners' subscriptions.

The Second World War poet Alun Lewis, was born near Aberdare in the village Cwmaman and there is a plaque commemorating him, including a quotation from his poem The Mountain over Aberdare.

The founding members of the rock band Stereophonics originated from the nearby village of Cwmaman. It is also the hometown of guitarist Mark Parry of Vancouver rock band The Manvils. Famed anarchist-punk band Crass played their last live show for striking miners in Aberdare during the UK miners' strike.

Griffith Rhys Jones − or Caradog as he was commonly known − was the Conductor of the famous 'Côr Mawr' of some 460 voices (the South Wales Choral Union), which twice won first prize at Crystal Palace choral competitions in London in the 1870s. He is depicted in the town's most prominent statue by sculptor Goscombe John, unveiled on Victoria Square in 1920.

The town is served by Aberdare railway station and Aberdare bus station, opposite each other in the town centre. The town has also been subject to an extensive redevelopment scheme during 2012–13.

With the decline of both iron and coal, Aberdare has become reliant on commercial businesses as a major source of employment. Its industries include cable manufacture, smokeless fuels, and tourism.

All content from Kiddle encyclopedia articles (including the article images and facts) can be freely used under Attribution-ShareAlike license, unless stated otherwise. Cite this article:
Aberdare Facts for Kids. Kiddle Encyclopedia.