The Church of the St. Giles' in Pontefract, West Yorkshire, England is an active Anglican parish church in the archdeaconry of Leeds and the Diocese of Leeds. The church is Grade II* listed. St Giles is one of two Anglican churches in the town centre; the other being All Saints' which united into one benefice in June 2019. The current Priest of Pontefract is Canon June Lawson.

The church was rebuilt in the early 18th century; though additions have since been added later in the 18th century. The building was Grade II* listed on 29 July 1950.

The church is built of Ashlar gritstone and sandstone with pitches slate and lead roofs. The church has a west tower with nave and chancel under a continuous roof. There are seven bays of round-arched windows with three-light windows. There is a pedimented sundial above the paneled door. The octagonal bell tower was rebuilt in the 1786 and is of three stages and has a south doorway and clock faces to the south and north. It was designed by Thomas Atkinson, who worked for John Carr of York. 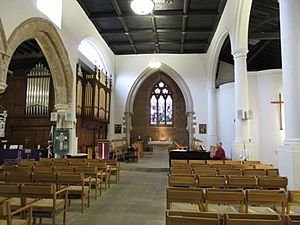 The entrance from the west tower has a round-arched doorway leading into a vestibule with two flights of stairs. A pointed-arched doorway separated the vestibule from the nave and lesser doors lead to the north and south aisles. The nave has a six-bayed south arcade with Doric columns decorated with lion masks. There is a pointed arch in front of the sanctuary with a stone rederos and the east window designed by C.E. Kempe installed in 1879. It depicts the Crucifixion, the Resurrection and the Assention. The west wall is decorated with the coat of arms of George I of Great Britain. 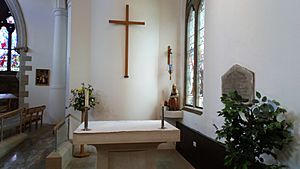 All content from Kiddle encyclopedia articles (including the article images and facts) can be freely used under Attribution-ShareAlike license, unless stated otherwise. Cite this article:
St Giles' Church, Pontefract Facts for Kids. Kiddle Encyclopedia.