The Church of the All Saints' in Pontefract, West Yorkshire, England is an active Church of England parish church in the archdeaconry of Leeds and the Diocese of Leeds. The church consists of two structures, an outer church constructed in the 14th and 15th century and ruined in the English Civil War and a smaller inner church completed in the late 1960s. The church has been Grade II* listed since 29 July 1950. The church is one of two Anglican churches in the town centre; the other being St Giles' 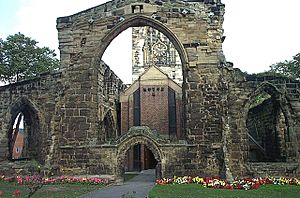 The new church within the old

The outer church is of 14th and 15th century origins and is largely ruinous. Alterations were made to the ruins in 1838. The outer church is of a cruciform plan; built of Ashlar sandstone with some rendering. The ruined nave with north and south porches contains the newer structure. The ruined structure has an octagonal tower added in the 18th century. There is a heavily ruined aisled chancel with a 19th-century inserted sanctuary. The south aisle of the nave has four bays with a porch in the second. The nave has a south clerestorey with four windows of twin trefoiled lights with a continuous hoodmould. The west end of the nave is buttressed flank with a four-centred arched doorway. The North nave is as the south with a two-story porch in the second bay. The central tower has paired windows each with two trefoiled lights with a quatrefoil in the arch and hoodmoulds. The tower has a clock face in an ogee crocketed canopy.

The inner church was completed in 1967 to a design by George G Pace. It is of brick construction with a pitched roof. The front is adorned with five medieval heads.

The nave has arcades with octagonal piers and pointed arches. The nave is built over with the 1967 church obscuring much of the floor plan. 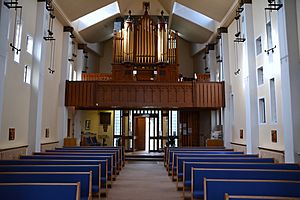 Interior of the inner church

The inner church was completed in 1967; it contained Victorian pews, which have since been replaced. The south chancel aisle has an ogee-headed tomb niche. The north and south walls have offset windows and the roof skylights, positioned so not to be obscured by the ruins of the outer church. The walls are whitewashed. There is a mezzanine above the entrance with a pipe organ positioned on top. There is an octagonal stone font.

The church is located on North Baileygate; separated from the town centre by Pontefract Castle which lies to the west. The closest railway station is Pontefract Monkhill which is situated around a quarter of a mile from the church.

All content from Kiddle encyclopedia articles (including the article images and facts) can be freely used under Attribution-ShareAlike license, unless stated otherwise. Cite this article:
All Saints' Church, Pontefract Facts for Kids. Kiddle Encyclopedia.