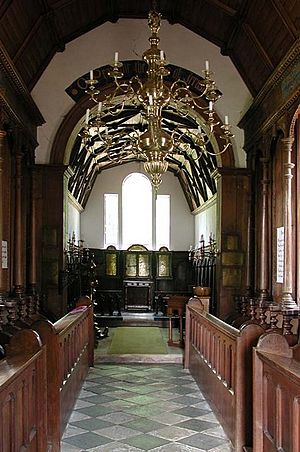 St John's Church is the Church of England parish church of the village of Little Gidding in Cambridgeshire. It is dedicated to St John the Evangelist and is a Grade I listed building. It is brick with a Ketton stone (a form of limestone) facing and a Collyweston stone slate roof.

The earliest known building on the site was a medieval one with associations to the Knights Templar which was decaying by the 17th century but restored by Nicholas Ferrar and his family when they founded their religious community in the village at that date. Mary Ferrar had the church panelled with oak wainscoting, some of which survives on the south side of the present church's chancel. They installed an organ in March 1631-32 (now lost). Mrs Ferrar also donated the surviving brass font of c.1625 and the 15th-century brass lectern with eagle, while the current cedar communion table also dates from the Ferrars' occupancy.

That church was replaced by the present one in 1714 with a nave 8 feet shorter than its predecessor and removing the west gallery the Ferrars had installed. It was in its turn restored and altered in 1853.

Although photographs taken during the 1900s show an organ within the church, a 1999 survey for the National Pipe Organ Register stated that as of 1999, there was no pipe organ in this church. 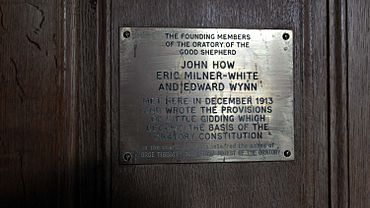 All content from Kiddle encyclopedia articles (including the article images and facts) can be freely used under Attribution-ShareAlike license, unless stated otherwise. Cite this article:
St John's Church, Little Gidding Facts for Kids. Kiddle Encyclopedia.