The church, founded in 1062, is a grade I listed building, and is the oldest church in Ramsgate. It was an abbey church until 1275, when it became a parish church. The building was enlarged in the 12th and 13th centuries, including a chancel and side aisles being implemented.

A lightning strike in 1439 resulted in the church being rebuilt, with the tower being raised to its present height.

As Ramsgate grew, the town developed its own church: St Laurence became a separate parish in 1826. 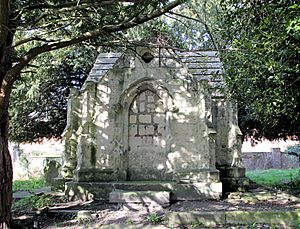 The D'Este Mausoleum in the churchyard

St Laurence has a large churchyard covering three and a half acres. It contains over 1400 graves, the earliest of which is dated to 1656.

All content from Kiddle encyclopedia articles (including the article images and facts) can be freely used under Attribution-ShareAlike license, unless stated otherwise. Cite this article:
St Laurence's Church, Ramsgate Facts for Kids. Kiddle Encyclopedia.