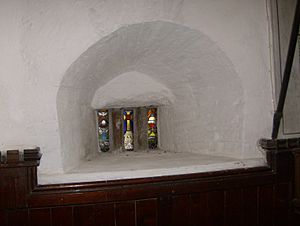 Tencreek cross and Culverland cross are stone crosses in the churchyard. The former was found in 1903 at Tencreek Farm and was moved to the churchyard in 1908. The latter was also moved here in 1908 and is thought to have come from a site near Trevecca.

In late 2018 St Martin's Church undertaken a major renovation in which the church was closed until the 9th of September; parishioners would have had to use St Keyne’s Church, or attend services held in the church halls St Keyne until the renovation was complete. The renovation replaced the pews with stow-able chairs, a new heating system, much improved AV facilities, improved toilets, and added the welcome addition of a small cafe.

The church is in a joint parish with St Keyne’s Church, St Keyne.

All content from Kiddle encyclopedia articles (including the article images and facts) can be freely used under Attribution-ShareAlike license, unless stated otherwise. Cite this article:
St Martin's Church, Liskeard Facts for Kids. Kiddle Encyclopedia.