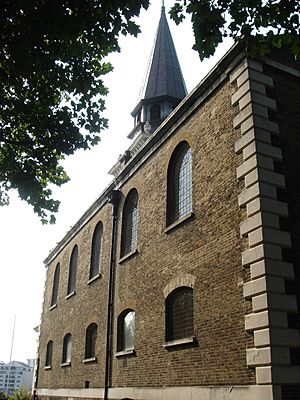 St Mary's Church, Battersea, is the oldest of the churches in Battersea in the London Borough of Wandsworth, in the inner south-west of the UK's capital city. Its parish shared by three Anglican churches is in the diocese of Southwark. Christians have worshipped at the site continuously since around 800 AD. It is a Grade I listed building for its combined heritage and architectural merit.

St. Mary's is among the earliest five documented Christian holy sites south of the River Thames in London, historically in Surrey, in the Diocese of Winchester. The original church was built around 800 AD, and the present building was completed in 1777. It was designed by Joseph Dixon, a local architect.

The church is built of brick, with stone used for quoins and other dressings. It consists of a nave, rectangular in plan, an apse at the east end forming the sanctuary, and a west tower. The west front has a single storey entrance porch with Tuscan columns supporting a pediment. The tower, rising immediately behind it, is topped with a clock chamber and a small spire. Inside, the whole width of the church is spanned by a flat ceiling, and there are wooden galleries supported by columns on three sides. The nave windows are in two tiers, the upper ones round-headed.

The church has strong connections with art and literature through the artist and poet William Blake, who married Catherine Boucher there on 17 August 1782, and J. M. W. Turner, who painted the river from the vestry window.

All content from Kiddle encyclopedia articles (including the article images and facts) can be freely used under Attribution-ShareAlike license, unless stated otherwise. Cite this article:
St Mary's Church, Battersea Facts for Kids. Kiddle Encyclopedia.