St Mary's is a parish church in Lenham, Kent begun in the 12th century with additions in the next three centuries. It is a Grade I listed building. 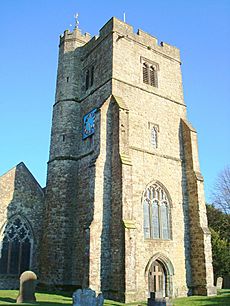 The tower from the north-west

The church was built in several phases and is constructed of local rag-stone and flint with a plain-tiled pitched roof to each section. The tower, built of randomly coursed rag-stone, was constructed in the 15th century and comprises three stages with buttressed corners and a stair turret on the north-east corner. The tower parapet and turret are battlemented and a string course above the third stage belfry windows incorporates gargoyles. The west face of the tower features a large, three-lighted window above the west door.

The north side of the nave is flanked with the 14th- and 15th-century north aisle constructed of knapped flint with dressed stone at the, older, eastern end and coursed rag-stone at the western end. The north wall has one perpendicular three-lighted window and two reticulated three-lighted windows with a similar fourth window in the west end. A rood loft stair tower at the east end of the aisle wall abuts the wall of the north chapel which is constructed of uncoursed flints and is probably of Norman. The chapel, which is lower than the aisle, includes a three-lighted reticulated window similar to those of the aisle.

The church is on the Historic England Heritage at Risk Register. 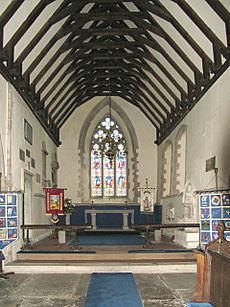 The chancel looking towards the altar and east window

Twenty-first-century improvements to the building (completed in 2012) include the addition of a south extension housing two toilets, replacing the two sets of entrance doors (an outer green baize pair and an inner oak door) with a glass door and ramps to enable easier access for wheelchair users and those with buggies, etc.

The church includes monuments to Robert Thompson (d. 1642), Henry Thompson (d. 1648), Hon. John Hamilton (d. 1714), Richard Bead (d. 1723) and Dame Alicia Colpeper (d. 1737). Other monuments in the church are dedicated to members of the Baldock, Brockwell, Codd, Dixon, Marshall and Perry families. The churchyard contains a number of Grade II listed monuments. The Doctor Who actor Tom Baker has a (as yet) unused gravestone propped up against the church wall in the graveyard. It reads "Tom Baker 1934-".

All content from Kiddle encyclopedia articles (including the article images and facts) can be freely used under Attribution-ShareAlike license, unless stated otherwise. Cite this article:
St Mary's Church, Lenham Facts for Kids. Kiddle Encyclopedia.