St Mary's Church, Mortehoe, is a Grade I listed Church of England church in Mortehoe, Devon, England, whose origins date back to the Norman Conquest. It retains many original medieval features, including a notable tomb containing the remains of Sir William de Tracy.

The oldest parts of the Anglican church of St Mary date back to Norman times, but it has been added to in subsequent years. The bell tower, carved pews and the de Tracy tomb (see below) are medieval. The chancel-arch mosaic and the 'archangel' window were designed by Selwyn Image. The later parts of the building are of the 14th and 16th centuries. The carved bench-ends are 13th century, the wagon roof of the nave 15th century and the chest tomb of William de Tracey, Rector of Mortehoe has been dated to 1322. 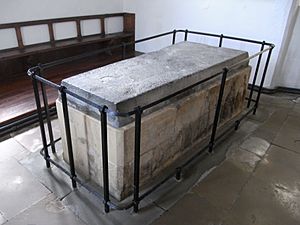 Group of heraldic shields sculpted in low relief on north side of base of chest tomb of Sir William de Tracy (d.1322), Mortehoe Church

The tomb in the south transept has a ledger-line inscription to a certain "Sir William de Tracy". The upper slab of black or dark grey granite or marble is incised with the life-size figure of a priest in full vestments, holding a chalice to his breast. The inscription is much defaced, but was recorded by Tristram Risdon (d.1630):

"On whose mangled monument I found this fragment of a French inscription, in this ancient character: 'Syree Williame de Trace...Il enat eeys-Meercy'".

Possibly a variant of such phrase as que Dieu ait mercy de son âme ("may God have mercy on his soul"). On the north side of the base of the tomb are sculpted in relief three escutcheons, now devoid of any colourings, listed from east to west :

On the same north side of the base at the west end, beneath plain canopies, are effigies representing possibly St. Catherine with her wheel, and St. Mary Magdalene, with long flowing hair. The south side of the tomb-base is divided into seven compartments, filled with Early Decorated gothic tracery; the Crucifixion forms the subject of the relief sculpture at the west end of the tomb-base, showing Christ on the cross with two standing figures either side.

Lord Sudeley insists this is the tomb of William de Tracy who is known to have been the incumbent of this church, endowed a chantry at Mortehoe in 1307/8, and died in 1322. The priest is described as 'Sir' because this was an oft-used prefix for priests in medieval times. It is unclear what family relationship, if any, this man had to William de Tracy (d.post 1172), the notorious co-assassin of Archbishop Thomas Becket (d.1170).

All content from Kiddle encyclopedia articles (including the article images and facts) can be freely used under Attribution-ShareAlike license, unless stated otherwise. Cite this article:
St Mary's Church, Mortehoe Facts for Kids. Kiddle Encyclopedia.