The Church of St Mary is an Anglican church in the village of Stoke d'Abernon, Surrey, in the Diocese of Guildford. The church, the oldest parts of which date from the 7th century, is a Grade I listed building.

The original church was built in the 7th century; substantial parts of the south wall date from this time. In building the Saxon church, some bricks, tiles and worked stones from Roman buildings were re-used. It was one of the churches in this area built soon after the introduction of Christianity by Saint Augustine, the first Archbishop of Canterbury.

The church was an ecclesia propria, being built on private grounds by a feudal lord. There is a high-level door, now blocked, in the south wall of the nave, leading to the thegn's gallery, where, until the 13th century when the square chancel was built, the lord of the manor had his own chapel.

The north aisle of the nave dates from about 1190. Stonework of the entrance in the south wall, blocked in 1866, can be seen; it was probably a modification of the original Saxon doorway.

The pulpit was given by Sir Francis Vincent in 1620, when he became a baronet. His arms and family motto are on the sounding board, which has elaborate wrought-iron supports. The pulpit is heptagonal and made of walnut; it stands on a central column, and is supported by seven part-animal, part-human caryatids.

The church chest, below the pulpit, is of oak and dates from late 12th or early 13th century. The organ, at the west end of the nave, was made for the church by Frobenius of Denmark in 1975.

The chancel, which replaced a rounded Saxon apse, dates from about 1240. It has a quadripartite vault.

The chancel arch, replacing the narrower Saxon arch, dates from the 1866 restoration of the church by Ford and Hesketh. 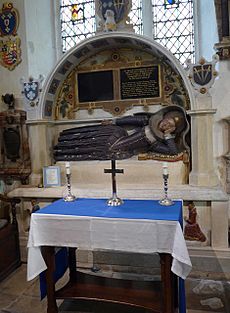 All content from Kiddle encyclopedia articles (including the article images and facts) can be freely used under Attribution-ShareAlike license, unless stated otherwise. Cite this article:
St Mary's Church, Stoke d'Abernon Facts for Kids. Kiddle Encyclopedia.