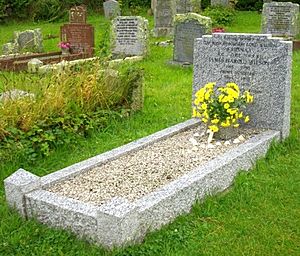 The Anglican church of St Mary was built at Old Town, Isles of Scilly during the 12th century, perhaps around 1130. Re-building was carried out between 1660 and 1667 including the addition of the south aisle, and a west end gallery for soldiers from the Garrison. Further improvements were made in 1743 when the east end was rebuilt.

By the nineteenth century, it was derelict and under the orders of Augustus Smith, Lord Proprietor of the Islands, it was restored.

The churchyard of Old Town church serves as the principal cemetery for the island of St Mary's. Over the centuries countless members of the old Scilly families have been buried here, as have been the crews of numerous ships lost near the Isles. Among them are Sir John Narborough and his brother James, the sons of Rear Admiral Sir John Narborough, who both died in the sinking of HMS Association in 1707. Also buried here is Ann Cargill (1760–1784), an 18th-century opera diva and celebrated beauty of her time. She died when her ship sank off the Western Rocks and was first buried on Rosevear, before eventually being interred at Old Town Church.

The churchyard has been enlarged and redesigned several times. Today it is divided into several sections with the oldest surrounding the church itself. This part of the cemetery features a monument to Augustus Smith (1804–1872) as well as mass graves of passengers drowned in the sinking of SS Schiller (1875). During the 19th century, terraces were cut into the hillside to make room for more burials.

The churchyard contains the grave of MP Ray Gunter (1909–1977), Minister of Labour under Prime Minister Harold Wilson. The grave of Lieutenant Roy Graham (1924–2007), who led the 1967 naval diving expedition that discovered the wreck of Admiral Sir Cloudesley Shovell's flagship HMS Association, can be found in one of the newer sections of the cemetery.

St Mary's Old Church is within the United Benefice of the Isles of Scilly parishes, comprising

All content from Kiddle encyclopedia articles (including the article images and facts) can be freely used under Attribution-ShareAlike license, unless stated otherwise. Cite this article:
St Mary's Old Church, St Mary's Facts for Kids. Kiddle Encyclopedia.