St Mary's Church, Stafford is a Grade I listed parish church in the Church of England in Stafford.

The church dates from the early 13th century, with 14th century transepts and 15th century clerestories and crossing tower.

The church was collegiate when recorded in the Domesday Book when there were 13 Prebendary Canons. It became a Royal Peculiar around the thirteenth century, exempt from the jurisdiction of the Bishop, but this caused conflict and culminated in December 1258 when the new bishop Roger de Meyland came to Stafford with many armed men who forced entry and assaulted the canons, chaplains, and clerks.

The church survived as a collegiate institution until the dissolution of colleges and chantries in 1548.

The church was heavily restored by Sir George Gilbert Scott between 1841 and 1844. 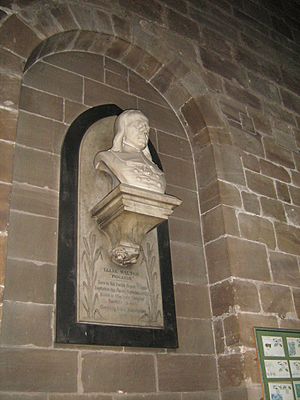 The church has large four manual organ by Harrison and Harrison dating from 1909. It has been awarded a Grade I Historic Organ Certificate by the British Institute of Organ Studies. A specification of the organ can be found on the National Pipe Organ Register.

The second organ dates from 1790 when John Geib installed it at a cost of £820. It was rebuilt in 1844 by John Banfield, and then Hill, Norman & Beard in 1974. A specification of the organ can be found on the National Pipe Organ Register.

All content from Kiddle encyclopedia articles (including the article images and facts) can be freely used under Attribution-ShareAlike license, unless stated otherwise. Cite this article:
St Mary's Church, Stafford Facts for Kids. Kiddle Encyclopedia.