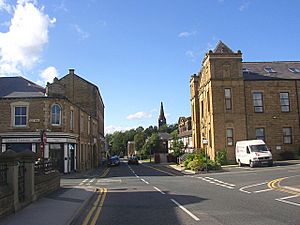 The church and spire seen from Commercial Street. 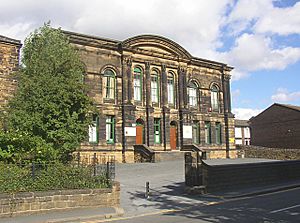 Current meeting place of the congregation on Commercial Street 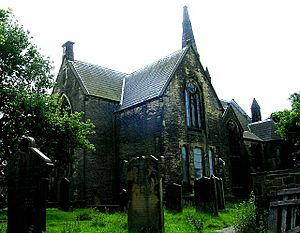 Church and graveyard prior to fire

St Mary in the Wood Church is a redundant and former Church of England Parish church in Morley, Leeds, West Yorkshire. It dates from the 19th century and was built in 1878. The former church is situated on Troy Road and Commercial Street north of the town. The church became redundant in the late 20th century and sat derelict until 2010. When a fire erupted and destroyed the church with only the spire surviving and burnt out parts of the former building. The church congregation is still active although meeting at a new place of worship on Commercial Street further south of the old church in a chapel.

All content from Kiddle encyclopedia articles (including the article images and facts) can be freely used under Attribution-ShareAlike license, unless stated otherwise. Cite this article:
St Mary in the Wood Church, Morley, Leeds Facts for Kids. Kiddle Encyclopedia.