The first church was founded before 1154, with a chancel extending over the south gate of the city. The gate and old church were demolished to make way for the rebuilding of Bristol Bridge, and the church was rebuilt in 1762–1769 by James Bridges and Thomas Paty, who rebuilt the spire. Part of the old church and town wall survives in the 14th-century crypt.

The interior was destroyed by bombing in the Bristol Blitz of 1940 and rebuilt in 1974–1975 as a church museum. This closed in 2007 and the building is now used by the city council as offices. The building still holds statues of King Edward I and King Edward III which were removed from Arno's Court Triumphal Arch. The original statues were taken from Bristol's Lawfords' Gate that was demolished around 1760. Other statues are 13th-century figures from Bristol's Newgate representing Robert, the builder of Bristol Castle, and Geoffrey de Montbray, bishop of Coutances, builder of the fortified walls of Bristol. They were moved to the church, due to their deteriorating condition, in 1898.

It also holds one of only two public commissions by Hogarth, the tripartite altarpiece (Bristol Museum ref K2429-K2431) online catalogue, Sealing the Tomb which was originally painted for St Mary Redcliffe Church in 1755. The painting remained at St Mary Redcliffe until 1858, when the Victorian community mounted a campaign to remove those furnishings which were not in keeping with the church's original gothic character. The three paintings were sold for £20 to the Bristol Academy for the Promotion of the Fine Arts (later to become the Royal West of England Academy). In 1910 their sale was again proposed, prompting the Bristol Times and Mirror to comment "Bristol will be looked upon as one of those places which prefer hard cash to art treasures" (Bristol Times and Mirror, 22 February 1910). In 1955 the paintings were passed over to Bristol Museum and Art Gallery and restored whilst residing in St Nicholas' church.

The building has been designated as a grade II* listed building. 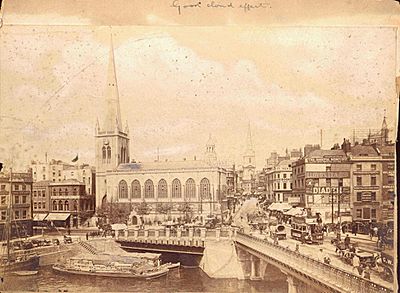 Black and white photograph from c.1900 showing the south view of St Nicholas church, Bristol, UK, in the context of Bristol Bridge, Welsh Back, and the 'Castle' district (now Castle Park). Other church spires visible in the photograph are All Saints' Church and Christ Church. In the foreground on the bridge can be see trams and horse-drawn wagons.

All content from Kiddle encyclopedia articles (including the article images and facts) can be freely used under Attribution-ShareAlike license, unless stated otherwise. Cite this article:
St Nicholas, Bristol Facts for Kids. Kiddle Encyclopedia.