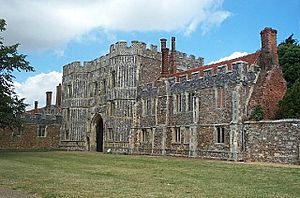 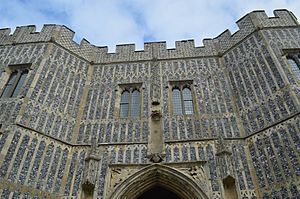 The upper part of the gatehouse

St Osyth's Abbey (originally and still commonly known as St Osyth's Priory) was a house of Augustinian canons in the parish of St Osyth (then named Chich) in Essex, England in use from the 12th to 16th centuries. Founded by Richard de Belmeis, Bishop of London, c. 1121, it became one of the largest religious houses in Essex. It was dedicated to Saints Peter and Paul as well as St Osyth (Osith), a royal saint and virgin martyr. Bishop Richard obtained the arm bone of St Osyth from Aylesbury for the monastic church and granted the canons the parish church of St Osyth.

The foundation began as a priory, probably populated first by canons from Holy Trinity, Aldgate. The first prior of St Osyth's was William de Corbeil, who was elected archbishop of Canterbury in 1123 and who crowned King Stephen in 1135. The priory was converted into an abbey in the mid-12th century.

In Gesta pontificum Anglorum, William of Malmesbury spoke in praise of the piety and learning of the canons at St Osyth's in the twelfth century. One of the second generation of canons there was William de Vere, later bishop of Hereford, who wrote a Latin Life of St Osyth, in which he mentions that his mother Adeliza, daughter of Gilbert fitz Richard of Clare, had been a corrodian at the abbey for twenty years of her widowhood.

A charter of King Henry II confirmed the right of the canons of St Osyth's to elect their abbot and to hold a market every Sunday at Chich in the later 12th century.

During the Suppression of the Monasteries, the religious group was dissolved by King Henry VIII in 1539, at which time there were a prior and sixteen canons. The king granted it to his minister Thomas Cromwell, but on his fall from favour, the abbey and its estates were returned to crown possession. In the reign of King Edward VI they were sold to Sir Thomas Darcy for just under £400. The gatehouse, dating from the late 15th century, is the most significant remnant of the original monastic structures still standing. The exterior is a fine example of decorative flint work. It stood in for St Anselm's theological college in the BBC's miniseries adaptation of P. D. James' Death in Holy Orders in 2003.

Five parts of the priory are Grade I listed buildings.

All content from Kiddle encyclopedia articles (including the article images and facts) can be freely used under Attribution-ShareAlike license, unless stated otherwise. Cite this article:
St Osyth's Priory Facts for Kids. Kiddle Encyclopedia.