St Patrick's Church is a Roman Catholic Church in Bolton, Greater Manchester, England. It was built in 1861 and is a Gothic Revival style building. It is situated on the corner of Great Moor Street and Johnson Street, to the west of Bradshawgate in the centre of the town. It is a Grade II listed building. 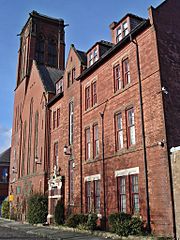 Ss Peter and Paul Church, from which St Patrick's Church was founded.

From the meeting in 1853 to establish St Patrick's Church in Bolton, a site was later found on Great Moor Street and an architect, Charles Holt, was commissioned to build the church. On 17 March 1861, the church was opened. Originally, the school was founded around the same time and housed in a three-storey warehouse. In 1884, a purpose-built school was constructed on Dawes Street, close to Great Moor Street.

All content from Kiddle encyclopedia articles (including the article images and facts) can be freely used under Attribution-ShareAlike license, unless stated otherwise. Cite this article:
St Patrick's Church, Bolton Facts for Kids. Kiddle Encyclopedia.