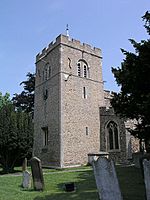 It is located in the south of the village and has been dedicated to St Peter since at least 1275. Built with a chancel, an aisled and clerestoried nave, and a west tower, it was originally built in the 12th century, and the tower and part of the chancel remain from this period. The nave was rebuilt in the 14th or 15th century. In 1728 the tower had the existing tall spire removed and replaced with the present shorter one. By the time the parishes were merged, the building was in a poor state, and had to be extensively repaired in the 1880s.

Its parish is part of a combined benefice with those of St Mary Magdalene Church, Ickleton and SS Mary and John, Hinxton.

All content from Kiddle encyclopedia articles (including the article images and facts) can be freely used under Attribution-ShareAlike license, unless stated otherwise. Cite this article:
St Peter's Church, Duxford Facts for Kids. Kiddle Encyclopedia.