St Thomas More is a Roman Catholic church in Bradford-on-Avon, Wiltshire, England. It is part of the Diocese of Clifton.

Located near the historic Town Bridge, Bradford-on-Avon, and opposite the Swan Hotel (AD. 1500) and the Dandy Lion Pub, the Catholic Church of St. Thomas More is a large and impressive structure.

The building was designed as the town hall and incorporated a police station and several other municipal services. The structure was designed by the Bath architect Thomas Fuller in Bath stone, featuring Jacobean gables, an oriel window and an octagonal tower with an onion dome. Fuller left England in 1845 for Antigua and then Canada, where he designed the Langevin Block of the Parliament of Canada, among other important commissions.

Although the town was small, the hall represented Bradford-on-Avon's pride in its wool market. The complex was put on the market in the 1930s for £3,000 and during the war years it hosted dances and film screenings.

In 1974 the building was designated as Grade II listed.

Use as a church 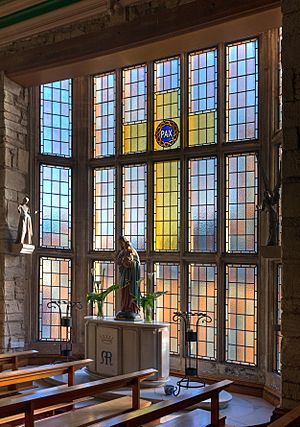 The complex was purchased and the first floor's council chamber was converted into a Catholic church in the 1950s. The expense of operating this large building is offset by a retail unit on the ground floor. A new staircase and lift was recently constructed at the back of the former council hall, now church, to the worship area so disabled worshippers can access the site from the car park.

All content from Kiddle encyclopedia articles (including the article images and facts) can be freely used under Attribution-ShareAlike license, unless stated otherwise. Cite this article:
St Thomas More, Bradford-on-Avon Facts for Kids. Kiddle Encyclopedia.